About CONVERSATIONS WITH MY MOLESTER: 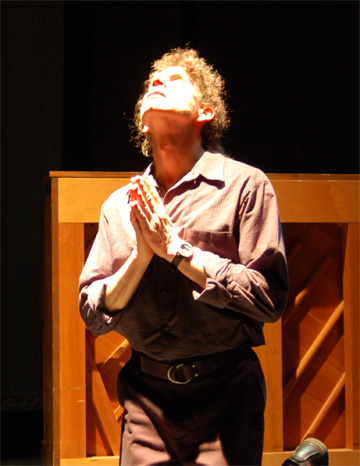 A Journey of Faith

Like many Catholic boys in the 1960s, Michael Mack wanted to be a priest. That dream ended at age 11 when his pastor invited him to the rectory to help with “a project.”

In the decades that followed, Mack wrestled with disturbing questions about sexuality and spirituality, and imagined one day meeting his abuser for a conversation. In 2008 he had that chance, and landed on his former pastor’s doorstep.  What happened next went beyond anything he had ever imagined.

Mack’s new solo play chronicles the events that took him full circle away from – and back to – the Catholic Church.

Mack is one of only four Massachusetts playwrights to receive the 2013 Dramatic Writing Fellowship – the state’s most prestigious and competitive artists award – “for creating work of exceptional quality.”

Read the NY Times front page feature article on this piece. Listen to the NPR interview. 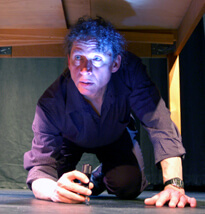 After serving in the US Air Force as an aircraft crew chief, Michael Mack worked a variety of factory and labor jobs before returning to school and graduating from the Writing Program at the Massachusetts Institute of Technology.

His work has been published in the Journal of the American Medical Association (JAMA), America, the Beloit Poetry Journal, Cumberland Poetry Review, and in Best Catholic Writing in both 2005 and 2007. Mack has been featured in the Washington Post, the Boston Globe, Backstage Magazine, and on NPR.

Awards include an Artist’s Grant for new theater works from the Massachusetts Cultural Council, First Prize in the Writers Circle National Poetry Competition, and an Eloranta Fellowship, which funded a residency at the Tyrone Guthrie Centre for the Arts in Ireland.

Mack has performed at the US Library of Congress, Yale University, Boston’s Museum of Fine Arts, the Columbia Festival of the Arts, Philadelphia Fringe Festival, the Austin International Poetry Festival, Off-Off-Broadway at the Times Square Arts Center, and at the FBI’s 32nd Annual Hostage Negotiation Seminar.

Mack has also performed at scores of venues for consumers and providers of mental health services, including McLean Psychiatric Hospital, the national conference of the National Alliance on Mental Illness (NAMI), the Healing the Generations Conference at Foxwoods Resort & Casino, and for faculty and students of the Harvard Medical School.

DANIEL GIDRON (director, dramaturge) was born in Israel, earned Fulbright and Wien Scholar­ships, and received his MFA from Brandeis University. Daniel has taught at Tel Aviv University, Hebrew University of Jerusalem and Brandeis. He currently teaches at UMass Boston. In Israel, he has directed for Habimah National Theatre, Dror Theatre in Jerusalem, Haifa Municipal Theatre (his adaptation of Amos Oz’s Late Love), Beit Lessin (Beckett’s Endgame, featuring a cast of Arabs and Jews), Arab Theatre in Israel (Accidental Death of an Anarchist), and Beersheva Municipal Theatre (The Beauty Queen of Leenane). Directing credits in the U.S. include Peterborough Players (Absurd Person Singular, The Fantasticks), Jew­ish Theatre of New England (Broadway Bound, Beau Jest, The Sisters Rosensweig, Social Security, The Last Night of Ballyhoo, Old Wicked Songs), Worcester Foothills, La Mama ETC, Gloucester Stage Company (The Loman Family Picnic), Merrimack Repertory Theatre (Visiting Mr. Green), The Lyric Stage Company of Boston (Or, Groundswell, November, Dying City, The Under­pants, The Complete History of America (abridged), Communicating Doors), Mountain Playhouse (The Underpants, The Foreigner, Unnecessary Farce, Stonewall’s Bust), New Repertory Theatre (Picasso at the Lapin Agile), and Shakespeare Now! (Julius Caesar, Macbeth, A Mid­summer Night’s Dream). He directed Annette Miller in the World Premiere of William Gibson’s Golda’s Balcony for Shakespeare & Company in Lenox, MA, and the Tremont Theatre in Boston, MA (IRNE and Elliot Norton Award winner – Best Solo Performance). Daniel is Associate Director of the Nora Theatre Company, for which he has directed over 20 productions, including The Unexpected Man, Smelling a Rat, the World Premiere of Richard McElvain’s adaptation of Sophocles’ Antigone, How I Got That Story, Full Gallop (also for Shakespeare & Company), Buried Child, We Won’t Pay! We Won’t Pay! The Cherry Orchard in a World Premiere translation by George Malko, The Caretaker, The Lady With All The Answers, Hysteria, and the World Premiere of a new musical, Silver Spoon. His production of Arabian Nights (a co-production of the Nora and Underground Railway Theater) recently finished a highly successful run at the Central Square Theater.

Sabrina Hamilton (lighting design) is the Artistic Director of the Ko Festival of Performance. Lighting credits include the New York Shakespeare Festival, the Goodman, the Cincinnati Playhouse and 7 years as the Route Lighting Designer for New York’s Village Halloween Parade under the direction of Ralph Lee. International lighting credits include work in: Bologna, Florence, Milan, London, Grenada, Geneva, Paris, Rio de Janeiro, Amsterdam, Brussels, Cardiff, Edinburgh, Bristol, Havana and Hong Kong. Her directing work, primarily original pieces, has been seen in New York, Berlin and throughout New England. CRAVINGS: Songs of Hunger & Satisfaction is currently touring to great acclaim. She is the director of INDUSTRIOUS ANGELS

Mack does not shy away from the disturbing elements of his experiences as an 11 year-old victim of a priest’s sexual crimes, yet this picture of a man rediscovering his past also manages to be funny, fond-hearted, and even comforting. It is about how power corrupts and destroys in the outward world, but it is also a work that never forgets the inner self, and the big journey that self is capable of undertaking.”
– Daniel Gewertz, Boston Herald

Read the NY Tmes article on the piece