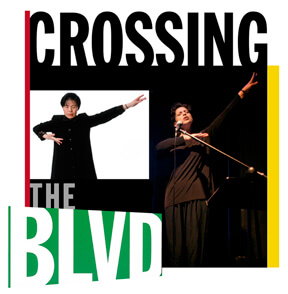 CROSSING THE BLVD: strangers, neighbors, aliens in a new america

Photography and design by Warren Lehrer

As immigration policy is hotly debated around the country in terms of national and cultural security Crossing the BLVD: strangers, neighbors, aliens in a new America presents the human stories of why immigrants and refugees have migrated to the US and what their experiences have been since they came here pre- and post-9/11.

Based on Lehrer and Sloan’s critically acclaimed book, actor/writer Judith Sloan channels many of the people that the couple interviewed on their three-year journey around the world through the borough of Queens, New York. The performance is illuminated by projections of Lehrer’s stunning photographs  along with an original soundtrack of music and sounds, including Sloan’s audio mixes, music by Scott Johnson and Gogol Bordello.

Home to the New York airports, Queens, is no longer made up of neatly partitioned ethnic enclaves. Today the choreography of Queens, a place where residents speak 138 different languages, is one of chaotic co-existence. This group portrait of a multi-ethnic, multi-racial community is a magnifying glass for the future of America. Above all, Crossing the BLVD is a celebration of resilient, prismatic character – in search of home.

“Immigrant life in Queens, as told in the intimate, rich, comic, ironic and sad stories so often seen but not heard in America’s big cities… Archie Bunker doesn’t live here anymore — not in the Queens of Crossing the Blvd. The first-person narratives are engaging… The stories are so different, and yet many of the immigrants’ lives are so similar… What links them all is the desperation and desire that brought them here. As one immigrant says in Crossing the BLVD, ‘America can do without you, but you can’t do without America’.” — The Washington Post, Lynn Duke 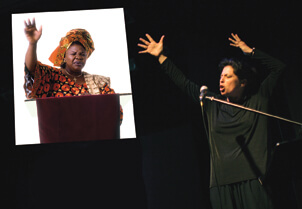 “Crossing the BLVD is a whirlwind tour and love poem of what has often been called the most racially and ethnically diverse county in America. In the tradition of the playwright Anna Deavere Smith, Ms. Sloan performs “Crossing the BLVD” adopting the personae (and respectfully mimicking the accents) of the varied immigrants whose stories are in the book… — The New York Times, City Room Blog, Sewell Chan

Featured as a “Global Hit”
“An incredible and moving story… Sloan and Lehrer spent three years talking to immigrants and refugees in Queens, traveling the world, in a sense, while never leaving their backyard… a place where new immigrants from every corner of the globe come to start their lives in America. The result is a unique multi-media project. Oral History with a twist!
— The World, PRI/BBC Marco Werman

“Behind the drab storefronts and nondescript homes that define the borough, Sloan and Lehrer discover a soulful place teaming with immigrants from Mexico to Australia whose stories unfold in a kaleidoscope of color…”
— CNN 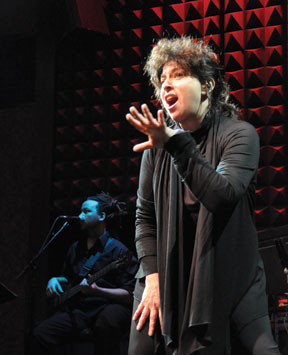 At Joe’s Pub at the Public Theater, NYC

Judith Sloan is an actor, audio artist, writer, radio producer, human rights activist, educator and poet whose work combines humor, pathos and a love of the absurd. Her solo show YO MISS! was a huge hit at the Ko Festival last season.

For over twenty years, Sloan has been producing and presenting interdisciplinary works in audio and theater, portraying voices often ignored by the mass media. Her other solo performances and plays include: Denial of the Fittest (nominated for best comedy performance at the Edinburgh International Fringe Festival), Responding to Chaos, and A Tattle Tale: eyewitness in Mississippi.

Her commentaries, plays, poetry and documentaries have aired on National Public Radio, New York Public Radio, WBEZ Chicago, PRI, BBC, and listener sponsored stations throughout the U.S. Sloan has received awards for her audio mixes, radio documentaries and work with various musicians integrating storytelling, acting, sampling and multiple languages into symphonic pieces, live performance with actors and musicians, and radio. Sloan was commissioned to write the libretto for 1001 Voices: A Symphony for a New America, with music by Frank London and animations by Warren Lehrer, which premiered in April 2012 by the Queens Symphony Orchestra. Her multi-layered theater work has been produced in theatres and festivals throughout the U.S. and abroad including: LaMama E.T.C, The Public Theatre, The Theatre Workshop (Edinburgh, Scotland), The Smithsonian Institution, the Market Theatre (Johannesburg, SA), etc. She has been featured in the New York Times, the Washington Post, Theatre Week, The London Stage, San Francisco Chronicle, among others.

She is the recipient of numerous grants and awards including a New York Foundation on the Arts Fellowship in music and sound; grants from the Queens Council on the Arts, the New York State Council on the Arts, Ford Foundation, Rockefeller Foundation among others. With Warren Lehrer she co-founded the non-profit EarSay and co-created the Crossing the BLVD book (W.W. Norton) and multimedia project. Winner, 2004 Brendan Gill Prize from the Municipal Art Society of New York, the 2003 Innovative Use of Archives Award, a Media That Matters Award; grants from Ford Foundation, Rockefeller Foundation, Franklin Furnace, New York State Council on the Arts among others. Sloan is a member of the faculty at NYU’s Gallatin School. 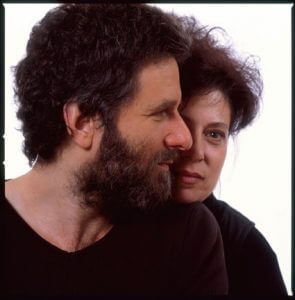 is a writer and artist/designer known internationally as a pioneer in the fields of visual literature and design authorship. His work explores the vagaries and luminescence of character, the relationships between social structures and the individual, and the pathos and absurdity of life. His books, acclaimed for capturing the shape of thought and reuniting the traditions of storytelling with the printed page, include: A Life in Books: The Rise and Fall of Bleu Mobley (Goff Books); Crossing the BLVD: strangers, neighbors, aliens in a New America (W.W. Norton) with Judith Sloan, The Portrait Series: a quartet of men (four book series, Bay Press); GRRRHHHHH: a study of social patterns (Center for Editions) with Sandra Brownlee and Dennis Bernstein; FRENCH FRIES with Dennis Bernstein (Visual Studies Workshop); i mean you know (Visual Studies Workshop), and versations (EarSay).

He has received many awards for his books and projects, including the Brendan Gill Prize, the Innovative Use of Archives Award, the IPPY Outstanding Book of the Year Award, a Media That Matters Award, three American Institute for Graphic Arts Book awards, two Type Director’s Club awards, The International Book Design Award, a Best of the Best Award from the New York Book Show, a National Indie Book Award, a Next Generation Indie Book Award, and a Prix Arts Electronica Award.

He’s received grants and fellowships from the National Endowment for the Arts, New York State Council and Foundation for the Arts, the Rockefeller Foundation, the Ford Foundation, the Greenwall Foundation, the Furthermore Foundation, and others. His work has been exhibited widely and is in many collections including the Museum of Modern Art, L.A. County Art Museum, The Getty Museum, Georges Pompidou Centre, and Tate Gallery. The Crossing the BLVD exhibition (co-produced with Sloan) has been to fifteen museums and galleries and continues to travel the country. Lehrer is a frequent lecturer, keynote speaker, performer and presenter at universities, conferences, art and literary centers, and book stores throughout the United States and internationally.   Lehrer is a professor at the School of Art+Design at Purchase College, SUNY, and a founding faculty member of the Designer As Author graduate program at the School of Visual Arts in NYC.