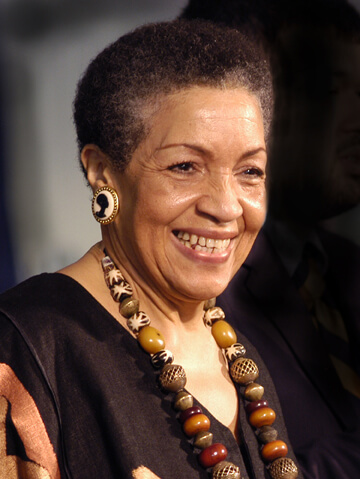 Created for adults, but appropriate for all ages

Onawumi Jean Moss, award-winning storyteller, celebrated Amherst community leader and elder is familiar to many KoFest audience members for her insightful comments in our post-show discussions, Onawumi is a veteran of many of our Ko solo performance workshops. Seriously…What Did You Call Me?  is her first solo theater piece inspired by autobiography

Literally our neighbor, her show brings our season-long discussion home, and introduces an examination of the African-American experience in this context. The piece chronicles her resilient migration through the Jim Crow South, the Civil Rights Movement, the ubiquitous war on poverty and her private struggles of BEING/BECOMING an empowered African American Woman who lifts her voice for justice at home and abroad — easier said than done.

Join this KoFest veteran on her thought-provoking, humorous, and soulful journey of discovery and transformation. Like many, Onawumi has fought for reclamation of her name. She hopes this work will encourage others to forge ahead answering only to names that honor them. Seriously.

This Tennessee native’s first stories were learned from her parents and in church. Her mother, a self-taught reader conveyed, by example, the inherent relationship of context and story and life-lessons. Her father, a natural-born comedian, told riveting night-sky stories as well as eerie, sometimes funny, ghost stories. Today Onawumi is an accomplished storyteller in her own right- a significant accomplishment considering the fact that over the course of twenty-one (21) years, she was a full-time Associate Dean of Students at Amherst College (1985-2006).

Onawumi holds numerous storytelling awards including the 2005 Zora Neale Hurston Award, the highest given by the National Association of Black Storytellers (NABS); the 2007 Brother Blue and Ruth Hill Award, from the League for the Advancement of New England Storytellers and has recently been nominated for the National Storytelling Network’s Lifetime Achievement Award. She is co-author of the award-winning children’s book Precious and the Boo Hag.

Locally, Onawumi was the narrator and co-writer of the PBS Special, KWANZAA, for WGBY TV, Springfield, MA. She founded, produced and performed in the multicultural “Keepers of the Word Storytelling Festival” at Amherst College, where she served as a dean of students for twenty-three years.  Her story-based presentations for the First Year Seminar, “Improvisational Thinking,” consistently earned high ratings from students.

Her involvement with the Ko Festival began 24 years ago as a performer in the Sunday Afternoon Family Storytelling series that was a part of Ko’s very first season. Since then she was has been a key member of the KoFest community, taking many of our 6-day intensive workshops, attending performances and playing an articulate part in the post-show discussions and civic dialogues that follow each of the Ko performances. In addition, Onawumi provided the voice-overs for Connie Congdon’s original comedy Is Sex Possible? that closed Ko’s “Age & Aging” season.

DJOLA BRANNER (Director) is an interdisciplinary artist/educator who combines movement, sound and light to create compelling portraits of American life for the stage. His original full-length and one-act dramas give voice to individuals historically absent from the theater, and explore a diverse range of human experience.

Co-founder of the award winning performance group Pomo Afro Homos, Djolatoured nationally and internationally with their shows Fierce Love: Stories From Black Gay Life and Dark Fruit, performing in venues as varied as college cafeterias and the Lincoln Center. His work has been supported by Creative Capital, the Jerome, McKnight and Bush Foundations, and published in numerous anthologies including Colored Contradictions, Staging Gay Lives and Voices Rising: Celebrating 20 Years of Lesbian and Gay Black Writers. His first collection of published plays, sash & trim and other plays, was nominated for a Lambda Literary Award in 2014.

Djola’s professional life has been defined by a passion for scripting, staging and performing original drama, and that passion has defined his approach to teaching as well. His classrooms/studios are marked by a commitment to unearthing each student’s authentic voice through an integration of theatrical disciplines, and a challenge to examine the cultural context of their work. Djola has taught dance, acting and dramatic writing for more than twenty-five years in community and academic settings including City College of San Francisco, Stanford University, University of Minnesota, Macalester College and the American Musical and Dramatic Academy (NYC).

He is currently an Associate Professor of Theatre at Hampshire College.

TALYA KINGSTON (Dramaturg) is a dramaturg with a particular interest in new play development and theatre for social change.  A Pioneer Valley resident for fourteen years, she holds an MFA in dramaturgy from the University of Massachusetts at Amherst and is currently a Visiting Assistant Professor of Theatre at Hampshire College where she teaches courses in dramatic literature, dramaturgy, and feminist theatre practices.  She also co-teaches a UMass course at the Edinburgh Fringe Festival each summer (2000plays.com).  She has a background in educational theatre, having previously held the position of Education Director at Hartford Stage. Her professional dramaturgy credits include the premiere of Eve Ensler’s NECESSARY TARGETS at Hartford Stage/Variety Arts Theatre, the US premiere of HELMET at the New York Fringe Festival and an immersive production of THE LONELY SOLDIER PROJECT by Helen Benedict in Northampton.

SABRINA HAMILTON (Lighting Designer) worked for many years with the noted New York theatre company Mabou Mines as Lighting Designer, Production Manager, Stage Manager, Performer, and Assistant Director. Other credits include work at the New York Shakespeare Festival, the Goodman Theatre, the Mark Taper Forum and 6 years as Route Lighting Designer for New York’s Village Halloween Parade under the direction of Ralph Lee. International lighting credits include work in 15 different countries. Most recently has been touring extensively as the Lighting Designer for Sandglass Theater’s D-Generation. Hamilton’s directing work, primarily original pieces, has been seen in New York, Berlin and throughout New England. She is the United States Institute for Theatre Technology (USITT) representative to the Lighting Design Working Group of OISTAT, the international parent body of USITT. Hamilton has served on several state and national grant panels and has served several terms on the Network of Ensemble Theaters Board. She holds a B.A. from Hampshire College and double M.F.A. in Directing/ Lighting Design from UMASS/Amherst. She was on the faculties of Hampshire and Williams, and served as the Program Director of the M.F.A. Theatre Program at Towson University in Baltimore for 2006-7. She is the Artistic Director of the Ko Festival and proud to call Belchertown her home.

“Critics and fans of Onawumi’s work ultimately agree that her presentations are shaped by rich content, soulful rhythms and impeccable delivery; she is a natural talent who takes a disciplined approach to craft. Using everything at her disposal–dramatic oral and a cappella mastery, graceful movements, mesmerizing facial expressions, incredible spontaneity–she transports listeners into worlds of the courageous, adventurous, the scheming and the charming. She has an uncanny way of leaving her listeners with something of interest to contemplate and a “craving” for more. That she is increasingly touted for being a powerful and eloquent storyteller/presenter is a ‘no-brainer’. Quite frankly, Onawumi is a must-have experience.”
– E. Patrick Johnson, Associate Professor
African American and Performance Studies, Northwestern University, IL.