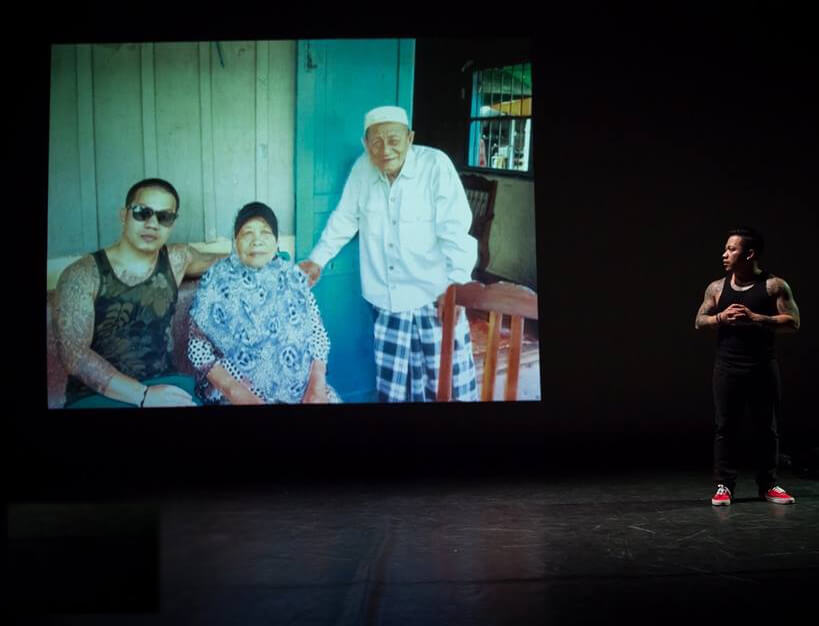 FROM REFUGEE CAMP TO PROJECT

Running time: Approx 55 mins.
Appropriate for middle schoolers and up

The world premiere of a solo show about a young man born to a Cambodian family in a Thai refugee camp in the aftermath of the Khmer Rouge genocide. In America, he finds himself courted by gangs, trapped in a ghetto, surrounded by poverty and violence and the explosive moods of his traumatized parents. Through hip-hop dance, traditional Khmer dance, personal narrative and spoken word poetry, and video, Sokeo takes us on his journey from the Asia to America, from housing projects to artistic projects, and an epic return to the village his family was driven from in the 1970s. 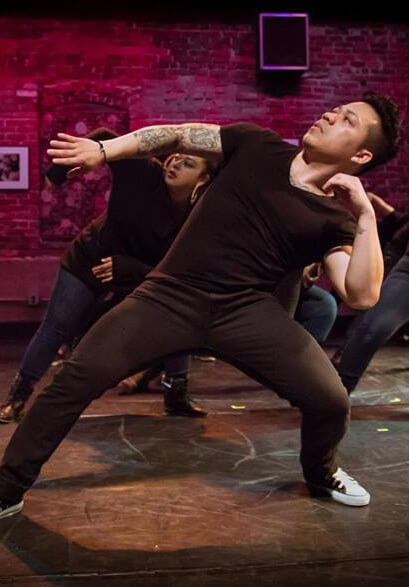 Sokeo says “This story is mine. It is a story of struggle, pain and progress. It is a story that will shed some light on the lives of Cambodian Americans, also known as “Khmericans,” and what they went through as immigrants of the United States. It is also my story of how self-expression and art have helped me surmount my past and discover the beauty in life, becoming an artist that is passionate about giving back to the community, locally and globally.”

The piece uses the rich artistic vocabulary that Sokeo has developed as a means of self-expression, beginning with documentary video that sets the historical background and introduces us to his parents. Sokeo’s live performance goes on to combine hip-hop choreography, traditional Khmer dancing, breakdancing, popping, and krumping, and intertwines these dance and movement forms with personal narrative and spoken-word poetry. 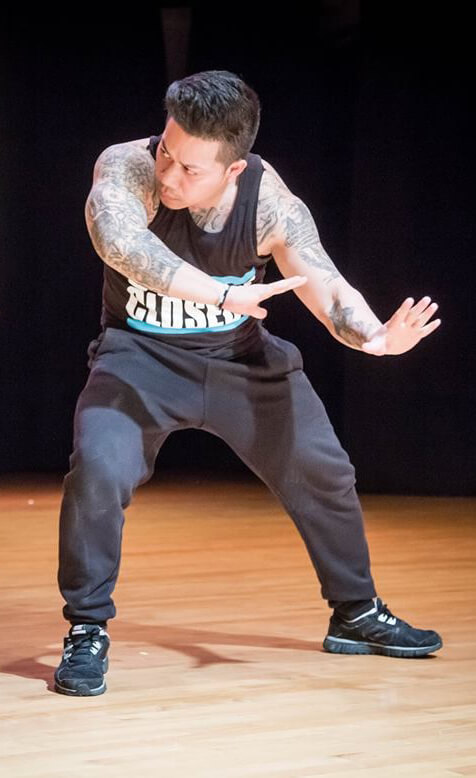 SOKEO ROS was born in a Cambodian refugee camp in Thailand and arrived in the United States at the age of three. As a sophomore in high school, he began performing with the Carriage House Performers, a Providence-based hip-hop group. In 1998, Sokeo joined Everett as a creator and performer,  Sokeo has been in four touring pieces with Everett, including Brainstorm and most recently Freedom Project, which explores mass incarceration and its effects on all aspects of society.  He also tours throughout New England in Everett’s educational shows. Soeko also is erves as the director of the hip-hop dance program at Everett’s School and has taught at many Rhode Island institutions including Central Falls High School, the Lincoln School, and the Rhode Island School of Design.

Sokeo also directs the hip-hop based troupe, Case Closed!, which he founded in 2004. Case Closed! has performed at venues across New England including the Veterans Memorial Auditorium, Brown University and the Providence Performing Arts Center. Work with them includes the hip-hop theater piece, Culture Shock, He created and was a performer in Case Closed!’s  most recent piece, “A Daydream in the Ghetto.”

DOROTHY JUNGELS co-founded and is a co-artistic director of  Everett Dance Theatre (Everett) in 1986, after receiving a Choreographer’s Fellowship from the Rhode Island State Council on the Arts. Dorothy is the recipient of two choreography fellowships from the National Endowment for the Arts, a Rhode Island Foundation Fellowship, and six fellowships from Rhode Island State Council on the Arts. Under Dorothy’s direction, Everett has been recognized with a Bessie, a New York Dance and Performance award, a Pell Award for excellence in the arts, and the RI Alliance in Education Award for combining science and art.

AARON JUNGELS is co-founder and co-artistic director of Everett, and brings a variety of skills in performance, design, and media creation to his work with the Company. Aaron graduated from Rhode Island School of Design with a degree in film and video, and studied acting at Trinity Rep Conservatory. In addition to designing and constructing many of the innovative props, set pieces, and non-traditional projection surfaces used by Everett, Aaron renovated a carriage house that is home to the Company’s studio theater and School. For his work outside of Everett, Aaron has received fellowships and grants from the Creative Capital MAP Fund and from the Rhode Island State Council on the Arts.

About the Performance Project & the “FIRST GENERATION” Ensemble

The Performance Project is an arts community of many ages and ancestries dedicated to personal and social liberation. Young people at the heart of our work create compelling visual and performing art that engages the public in dialog about critical social and cultural issues.  Members participate in intensive artistic training, leadership development, and inter-generational mentoring. Through creativity and the arts we celebrate our connection and our full humanity. 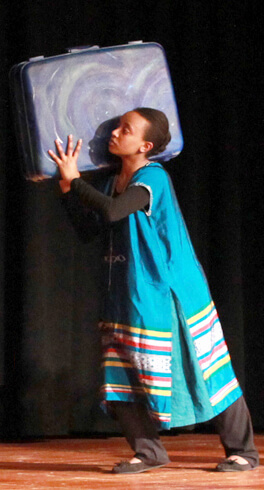 First Generation is an intensive, arts-based, youth leadership development program in Springfield, MA. It provides a platform for young people to claim a public voice in their community, and beyond.

The program brings together youth ages 15-22 who identify as “first generation,” for research, self-reflection, artistic training, and dialogue. Forming an artistic ensemble, the group creates multilingual performances based on their discoveries. Community elders participate in our creative process by sharing their inter-generational experiences and perspectives.

There are many ways to be “first generation.” Ensemble members may be the first in their family to grow up in the United States, the first to speak English, to graduate high school, go to college, to be incarcerated, be drug free, be openly GLBT, to break the silence, to be an artist, or many other firsts.

First Generation addresses the complexity of embracing individuality while honoring one’s family and community cultures. Our performances and events invite audiences to participate in public dialogue about generational issues, and about how racism, economic oppression, bigotry, media and violence can sever youth from their cultural origins. The work of First Generation is rooted in the belief that our cultural legacies and family histories are sources of strength as well as struggle.

Artistic Director Julie Lichtenberg and Performance Project members have been attending Ko performances for 11 years, and in 2011 after First Generation Ensemble performed RIPPLE EFFECT to sold out Ko audiences, The Performance Project and Ko formalized the partnership. In 2013 they premiered fo n ‘ale (“we must go” in Hatian Creole as part of Ko’s COURAGE season.) We continue to collaborate and share ideas through rehearsal residencies and artistic exchanges.

ABOUT THE “FIRST GEN” MEMBERS IN THIS PRODUCTION

Adam Abdelrahman is also known as Jackey Shemamora, and he likes both names. He is the oldest of 6 brothers and one sister. He was born in Khartoum, the capital city of Sudan and he grew up in his father’s hometown in Darfur. Because of the war in his country, he had to leave Sudan. He lived in Cairo Egypt for almost 4 years and then came to the US. He is a student at Holyoke Community College. His biggest passions are dancing, Kung-fu, reading and developing his English, soccer and Tai Chi. He is a First Generation Ensemble Member.

Veronica Israel is mostly called by her nickname Nica. She was born and raised in Haiti where she lived for fifteen years. She is the second to last of 6 brothers and sisters. Besides her mother, she was raised, also, by her two oldest brothers and her two oldest sisters. Along the way, her little sister became her best friend. She moved to the U.S., Springfield MA, in September 2012, where she immediately started at the High School of Commerce. Her biggest passions and talents are, dancing, singing, photography and theatre; preferably multicultural theater. She is currently a rising senior, a member of First Generation Ensemble of The Performance Project, and also a member of her Church choir and dance team.

Danaïca Eliadine Desir is mostly called Dana by her friends and family. She is 15 years old and has 2 brothers and three sisters. In September, she’ll be a sophomore at Central High School. She was born and raised in Haiti, but moved to Springfield MA a week before she turned 13.  Her biggest passion is dance. She loves to learn new styles of dance, and she dances as much as she can, wherever she can, and whenever she can. She really, really loves dancing! She also loves to learn about people’s stories and their life experiences and she always tries to get something out of them. She goes to church every Sunday and each time she learns something new about herself and the other people around her. Some of her hobbies are listening to music and reading stories that end with a good lesson. On her free time she draws and watches movies and dance. She just loves to have fun.

Fynta Sidime is the first female in her family to be feminist and first female to graduate from High school and attend college. She will be entering Hampshire College in the fall as a James Baldwin Scholar. Her focus will be Theater and Gender studies. She was born in the Bronx and raised in West Africa, Guinea Conakry from the age of three. She moved back in the US in the year 2012 and began high school. She’s an Upward Bound scholar, and she has been involved in journalism at her school. Two of her stories have been published. She is very passionate about languages. She speaks French, Mandigo, Susu, Fula, Krio, and English; she’s leaning Spanish and self-teaching Hindi. She’s also a member of First Generation Ensemble.