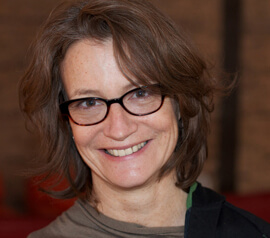 Between 1900 and 2000, life expectancy in the United States increased by over 30 years. Writer and journalist Ashton Applewhite is interested in our pervasive ambivalence about living so much longer.  Less than thrilled by the prospect herself, she struggled to come to grips with her own complex feelings about growing old — and the more she found out, the better she felt.

It turns out that people are happiest at the beginnings and the ends of their lives. That in colonial America, it rocked to be old. That the older people get, the less afraid they are of dying. Visit her blog (www.stayingvertical.com) to get a taste of what she’s been thinking about. Join us if you’d rather be angry about ageism than worried about aging, and let’s talk about it afterwards.

Admission is by donation. (You must donate something but the amount is up to you!)

Ashton Applewhite didn’t set out to be a writer but that’s what happened. She is the author of Cutting Loose:  Why Women Who End Their Marriages Do So Well, which explored the discrepancy between our notion of women’s lives after divorce (weepy, broke, lonely) and the reality (happy, broke, way less lonely than before). Likewise, Staying Vertical explores the discrepancy between our notion of late life (debility, dementia, depression, death) and the reality (far less debility and dementia than you think, better mental health than younger people, and yeah, death). Over the course of her research she has become a Knight Fellow, a New York Times Fellow, and an Age Boom Fellow (Columbia School of Journalism).

Ashton has written other books and been published in Harper’s magazine and the Brooklyn Rail. Despite never having taken a science course, she is a staff writer at the American Museum of Natural History. The first woman to have four books on the New York Times bestseller list at once, she was a clue on “Jeopardy” as the pseudonymous author of the Truly Tasteless Jokes series. Lots of people have suggested she try stand-up comedy. This talk will be the closest she’s ever come to it.