produced by Hand2Mouth (Portland, OR)

In 2001, Hand2Mouth ensemble member Erin Leddy lived with her grandmother, Sarah Braveman, for a year and recorded her memoirs. These interview tapes form the bones for this performance, a meditation on consciousness, memory and mortality. Sarah was a stage actress in Boston and New York from the 1930’s to the 1990’s. My Mind Is Like An Open Meadow appears to be a solo performance, but ultimately emerges as a duet between two generations of theatre artists, one returning for her ‘final performance’ that is carried out by her granddaughter.

My Mind Is Like An Open Meadow honors the voice and wisdom of one woman, but becomes something bigger: memoir, memory, the words we are compelled to impart before death, the strange and simple things that call us to pay attention to the life around us. The performance is a sort of ritual, an attempt to make sense of this complicated life. 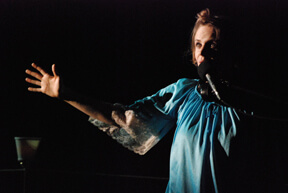 Leddy began crafting the piece in Portland in February 2010 before traveling to Yaddo in Saratoga Springs for a 4-week residency where she worked alone and with her grandmother to generate material.  Work-in-progress versions were shown at the Northwest New Works Festival at On the Boards, at the Risk/Reward Festival of New Performance (June 2010), and Portland Center Stage’s JAW Festival (July 2010).  The first full-length version premiered in Portland on January 20, 2011 as part of the Fertile Ground Festival.  In June 2011 My Mind Is Like An Open Meadow was awarded 5 Drammy Awards, including Outstanding Production of 2010-11. 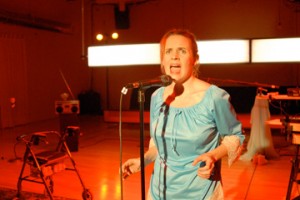 Hand2Mouth is a theatre ensemble committed to creating original work. Drawing from dance, music, theatre and design, Hand2Mouth strives to connect honestly with audiences and collaborators, blurring the line between performance and reality. We celebrate the raw, charged potential of the live encounter, and our methods and styles change to meet the demands of the work. Hand2Mouth performances push boundaries towards theatre that is bold and accessible.

Described by The Seattle Times as having “the kind of promise, fearlessness and energy that the American theater needs, and should encourage,” Hand2Mouth is a permanent ensemble of performers led by Artistic Director Jonathan Walters. Founded in 2000, the company has created over 18 original performances from its home in Portland, Oregon. Hand2Mouth has received multiple Portland “Drammy” Awards, including two for Outstanding Ensemble Performance. Recent performances have been presented by La MaMa E.T.C. (New York, NY), Portland Institute for Contemporary Art, On the Boards (Seattle), Bumbershoot Arts Festival (Seattle), Ontological Hysteric Incubator (New York, NY), Myrna Loy Center (Helena, MT), furyFACTORY Festival (San Francisco), and the Network of Ensemble Theaters National Summit in San Francisco.

ERIN LEDDY  (creator/performer) is a company member and performer for Hand2Mouth Theatre. Erin has been with the company since 2003 and has been a performer and co-creator in 15 original productions. Erin attended Emerson College in Boston, where she graduated with a degree in Radio.

JONATHAN WALTERS (director) founded Hand2Mouth Theatre in 2000 and functions as  Artistic Director. Jonathan has directed the bulk of Hand2Mouth shows,  and works closely with guest writers and the ensemble to develop new  work. Jonathan worked in Poland in 1999 with street theatre Biuro  Podrozy and Teatr Usta Usta, and has collaborated, trained and worked with many American physical theatres, including Sojourn Theatre, The  Carpetbag Brigade and Elevator Repair Service. As a director Jonathan has attended the Unidram Festival in Potsdam, Germany, the Reminstincje Festival in Krakow, Poland, the ATHE Conference in NYC, and the PuppetLove! Festival in San Francisco, California.  His theatre work has been reviewed in Just Out, Willamette Week, The  Oregonian, the Portland Tribune and the Portland Mercury. Jonathan is a  2005-07 recipient of a Career Development Program for Directors  Fellowship awarded and administered by Theatre Communications Group and  the National Endowment for the Arts.

Watching Leddy’s young, fresh face reciting the wisdom of age was simultaneously an affirmation of life and a memento mori. – The Stranger | Brendan Kiley | September 2011

The piece soon evolved into something bigger than what we might have expected. It became an exploration of consciousness, memory, things passed down through generations (both inherited and learned) and ultimately concerned the relationship between artist and audience, self and other. Leddy is a superb performer, but what made the piece so compelling was the subtlety of its composition. To explore epistemological issues in this way takes skill; to reveal their potentially deep emotional underpinnings is something quite extraordinary…Leddy is most certainly someone to watch. – Seattle Post-Intelligencer | Jim Demetre | June 2010

Building recollection upon image upon song, the performance was a moving mosaic about family, memory and aging. Hand2Mouth’s decidedly nonlinear approach to thematic exploration can be frustrating at times, but here it made for something utterly lovely. – The Oregonian | Marty Hughley | January 2011

The show’s something of a duet, actually, between Leddy and sampled recordings that her now-91-year-old grandmother, Sarah Braveman, made in 2001 and 2010, cleverly edited to create a convincing illusion of live conversation. Braveman serves as narrator, critic and subject, reading poems, critiquing her granddaughter’s lovely, Death Cab-esque songs and recalling painful memories of her childhood… Braveman’s struggle to remember the names of long-dead cats is heartbreaking, and the soundscape created by Ash Black Buffalo, John Berenzen and Holcombe Waller is as immersive and compelling as anything I’ve experienced. Leddy’s performance is physically strenuous and emotionally draining, her best work to date.  – Willamette Week | Ben Waterhouse | January 2011

Leddy delivers what countless other performance artists attempt: an intimate examination of human fragility, memory, and loss. For our money, Meadow has struck some of the hardest balances: It manages to be sentimental without being saccharine, universal without being reductive, and intimate without being indulgent. – Portland Monthly | Anne Adams | July 2011