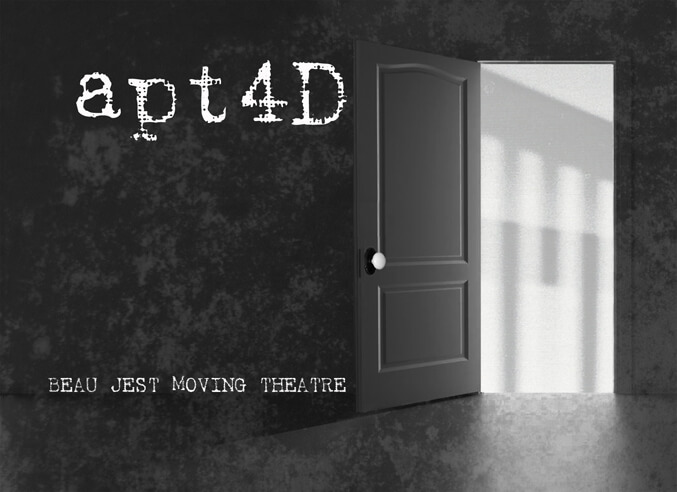 Click HERE to see what the critics thought in Boston.

Running time: 60 minutes. Appropriate for high school and up. 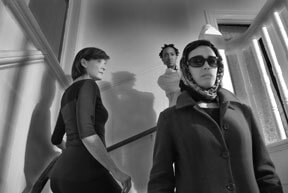 when a mysterious woman moves in next door.

Three unemployed people are brought together by chance and geography: Meg the librarian, Hunter the filmmaker, and Avery the laid-off executive. They all reside at the Franklin Arms, a pre-war apartment building that has seen better days. The comfort of their solitude at home is in stark contrast to their uncomfortable proximity as neighbors. The arrival of a mysterious stranger in Apt. 4D is the catalyst for a series of imagined and real adventures that lead from the laundry and mailroom to the basement and the roof.

Apt. 4D is a quiet examination of the heroic quest to make it through the day.

Based in Maine/Boston, the award-winning Beau Jest Moving Theatre is a physical theater ensemble that creates a detailed world using movement. With this piece, a gentle new comedy, the ensemble celebrates their 30th Anniversary by returning to their physical theater roots.

Beau Jest is one of New England’s premiere theater companies, known for their imaginative productions and a joyous physical acting style. Winners of the 1995 Boston Theater Critics Circle Award and the 2010 Independent Reviewers of New England (IRNE) Award, they have long been recognized for their creative approach to theater. Whether taking a full year to create an original work, or interpreting an existing script, the company brings their trademark blend of physical imagery and innovative staging to every show.

A strong streak of optimism runs through all of Beau Jest’s work, and a willingness to experiment with many styles. Mask and puppets, historical events, cabaret artists, cartoonists, tap dancers, choreographers, and composers have been but a few of the influences on the company’s collaborations.

Beau Jest is an artist-run organization with a thirty year history of exploration and investigation into the role of the actor as creator, and the uses of movement and text to spark theatrical immediacy.  They are members of the Network of Ensemble Theaters.

The artistic strength of their work has carried them to appearances around the country including two Off-Broadway runs,  performances at Lincoln Center and Piccolo Spoleto, and hundreds of shows in theaters in the New England area. The desire for artistic freedom and a total personal investment by the actors in the quality of the work are major reasons for the company’s existence. Beau Jest productions have been chosen Best of the Year by Boston area papers in 1985, 1987, 1989, 1994, 1995, 1996, 1999 and 2006.

They are happy to be returning to their performance roots by doing an all-new original show using only an empty stage and one bench in a piece written collaboratively by the performers.

Davis Robinson (Director/Hunter) is the artistic director of Beau Jest, where he has been writing, acting, and directing for the past 30 years. Beyond Beau Jest, Davis has worked around New England as a teacher and director for Bowdoin College, Emerson College, The Theater at Monmouth, The Lyric Stage, and others. He teaches devising and physical theater at The Celebration Barn each summer in South Paris, Maine. Davis trained with Jacques Lecoq in Paris, France, and is author of “The Physical Comedy Handbook”.

Kathleen Lewis (The Woman In 4D) Kathleen started working with Beau Jest in 2011. After earning her B.A. at Bowdoin College she began collaborating with Beau Jest for shows at the Tennessee Williams Theater Festival in Provincetown, MA. She has worked on Williams’s American Gothic and Ten Blocks On The Camino Real; Brecht’s, Good Person of Szchewan; and most recently her own film project, I Like You.

Robin JaVonne Smith (Meg) Robin has been a part of the wacky Beau Jest family since her 2006 debut in Samurai 7.0. Other shows include The Rocky Horror Show and Peter Pansy with Ryan Landry’s Gold Dust Orphans, Sunday with Joy with Fort Point Theatre Channel (with whom she is also a member), and Blanche/Pembroke in King John with Actors’ Shakespeare Project. She received her A.B. in English and Theatre from Bowdoin College and also studied at the British American Drama Academy in London.

ker (Avery) is proud to be a founding member of Beau Jest, and has co-created and appeared in all of their shows, as well as writing and touring with Beau Jest Junior for school-age audiences. Her other credits include Centastage, Fort Point Theatre Channel, New Century Theatre, Foothills Theatre, Stoneham Theatre, Shear Madness, Lyric Stage, Tempest Productions, Wheelock Family Theatre, Durham Center Stage, Threshold Theatre, City Stage, and several appearances at the Boston Theatre Marathon, as well as voice over, commercial, and industrial work.

Karen Perlow (Original Lighting Designer) Karen is so happy to have the opportunity to play with Beau Jest again, having designed Ten Blocks On The Camino Real in 2012, and Samurai 7.0 a few years back.  She is a 3 time IRNE award winning lighting designer (www.karenperlowlightdesign.com). She serves as the treasurer of the Theater Community Benevolent Fund, (TCBF.org).

Lily Prentice (Costume Consultant) Lillian Prentice is overjoyed to be involved in her first show with Beau Jest. Leading from her BA in Visual Arts at Bowdoin College, she utilizes her background in fine arts and costume production to enhance her work as a Costume Designer. She has worked in creative and technical roles at a wide range of theater companies, including Shakespeare and Company, Bowdoin College Department of Theater and Dance, Shakespeare Theatre Company in Washington, DC, Purple Rose Theatre Company, and Shakespeare’s Globe. She will begin her MFA in Design for Stage and Film at NYU in fall 2014.

Hannah Cyrus (Stage Manager) graduated from Bowdoin College in 2012 and is currently studying Library and Information Science at Simmons College. This is her first production with Beau Jest, and she’s grateful for the chance to keep a metaphorical finger in the theatrical pie in between school and her day job!