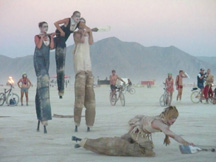 If the ocean were ill, how would she weep?

Where do we look when our eyes are closed?

What words do we hear when no one is speaking? 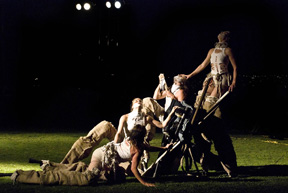 Can we parch our thirst with this salt-coated cocktail of whispers,
warnings and invocations conjured by the watery wrists of ceaselessly undulating waves?

If clouds were cryptographs, could we understand the symptoms?

If a sailor survived a siren’s song, could we catch the words falling from the saline tongue?

On the Amherst College Observatory Lawn off of Snell Street in Amherst.
Bring blankets, lawn chairs and insect repellent, but leave the dogs at home!

Please note: no credit cards at the door. 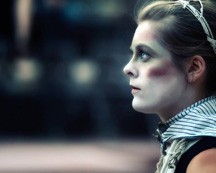 “Callings” derives its inspiration is a poetic homage to the sirens of the sea and the secret intentions of the voices that captivate and haunt us. Drawing on the The Carpetbag Brigade’s unique physical theater vocabulary of acrobatic stiltwalking, butoh dance and contact improvisation, this unique site-flexible performance is equally at home in proscenium theaters, soccer fields, parking lots and black boxes. In the delicate overlap of circus, dance and theater “Callings” weds the grace of modern dance with the raw intensity of physical theater in the spectacle-based format of acrobatic stilts. Images and issues of climate change evoke a shifting undertone of change in a performance that transcends demographic prejudices and remains accessible while maintaining an intimate sense of mystery and tension. “Callings” examines our superstitious nature of creating meaning and asks us to listen to the world we imbue with the supernatural. 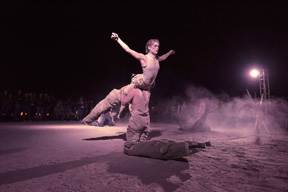 The Carpetbag Brigade’s work is distinctive for its breadth and synthesis of disparate performance modalities, both inside of the US and as a cultural export to other countries.  The company’s work draws from acrobatic stilts, physical theater, modern dance, Butoh and Contact Improvisation, a dance form which originated in the US in the seventies.

During its formative years (1997-2003) based in the small town of Prescott, Arizona, The Carpetbag Brigade created eight major original shows and countless smaller pieces.  Carpetbag productions exhibited a bold, experimental aesthetic, and were of all kinds: from street theater, to dance, to intimate indoor work, to site-specific outdoor shows, to mini-performances designed for festivals. The company also taught at a local high school and organized a free all-ages performance festival. After moving to the San Francisco Bay Area in 2003, The Carpetbag Brigade embarked on three annual four-month-long tours of both North and South America. In 2007 they were a company in residence at the Universal Forum of the Cultures in Monterrey, Mexico. In 2008 they performed three of their shows to critical acclaim at the Edinburgh Fringe Festival in Edinburgh, Scotland. Through 2009 and 2010 they returned to Mexico with their performance “The Vanishing Point” and in 2011 were sponsored by the US Embassy to tour their new production “Callings” to diverse street theater festivals in Colombia. During this time they also began an international collaboration with Nemcatacoa Teatro which resulted in a return to Colombia in 2012 to participate in the Iberoamericano Festival. In 2012 they also returned to Monterrey, Mexico to collaborate in a performance with the local company “Pura Vibra” that was produced by the Festival Internacional de Santa Lucia. In 2013 they are hosting Nemcatacoa Teatro from Colombia for a tour of the United States with support from the Mid-Atlantic Arts Foundation Southern Exposure program. 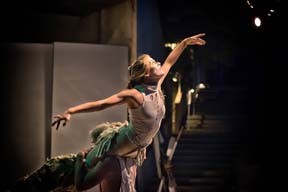 As the primary physical theater company in the United States significantly touring acrobatic stiltwork, Carpetbag has used the medium to create shows with an experimental aesthetic, but intended for the large scale, outdoor, popular audiences of spectacle based theater.  The Carpetbag Brigade has performed for over 250,000 people over the past six years, both inside and outside of the United States. The company creates evening length performances set to original music which — although built around a poetic storyline and dramatic scaffold — contain no text. This makes the work accessible cross culturally. The Brigade’s mixture of physical theater, modern dance, and acrobatic stilt walking creates a highly specialized art of performance where the worlds of theater, dance, and circus overlap.

They derive their inspiration and techniques from acrobatic stilt-walking, butoh dance, contact improvisation and traditions of European physical theater. Carpetbag Brigade performances are versatile and accessible and can occur in a variety of venues from black box theaters to fairgrounds and parking lots; from proscenium theaters to outdoor music festivals. The company composes original performances using theories and techniques of (what is called, in the United States) self-devised theater.  Founder and Director Jay Ruby studied physical theater in Berlin, Germany and Holstebro, Denmark. There, he encountered the work of Eugenio Barba, who developed influential methods of composition and training for physical theater performers. The Carpetbag Brigade’s approach to creating movement, action, and montage can be traced to these roots. 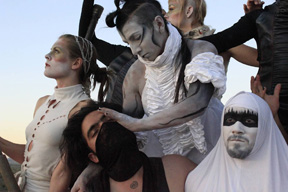 Performing both indoors and outdoors, The Carpetbag Brigade is known for fostering a sense of psychic intimacy, poetic dialogue, and mythic imagery in its work. The company has evolved acrobatic stilt work to include pioneering new partnering techniques, and applied modern dance and physical theater forms to create socially reflective performances. The training for participation in the company is rigorous and involves a complex set of unique skills. Training and performing with The Carpetbag Brigade requires actor/dancer/musicians with an embodied understanding and integrated physical vocabulary drawing from Yoga, Pilates, acrobatic stilts, Modern and post-modern dance (especially release technique and contact improvisation), Butoh, and keen vocal and physical memory for composing self-devised scores for physical theater montage.

The Carpetbag Brigade’s commitment to presenting work in both urban and rural environments has brought the company to such diverse venues as the Ford Theater in Hollywood, the Hoopa Indian Reservation, the InFringIng Dance festival in Canada, The Lincoln Center in New York City, Dell Arte’s Mad River Edgefest and the San Francisco International Arts Festival in California, The Burning Man Festival in Nevada, Sleepless Night in Miami Beach, Florida, The New Orleans Fringe Festival, diverse college campuses, as well as the Sacred Music Festival in Los Angeles, and the El Airo Puro and Iberoamericano Festivals in Bogota, Colombia. In 2007 The Carpetbag Brigade was invited to the Universal Forum of Cultures in Monterrey, Mexico to teach twenty local youth their acrobatic stiltwork for a four month residency. In 2008 they returned to Nanaimo, British Columbia to conduct the site-specific Whizzbang project. They have continued to share their pedagogic work through their unique form of Stiltasana workshops.

“The sheer visual of dancers on stilts willing to sacrifice their bodies and their breath for their art makes Callings a worthwhile odyssey….the audience feels as if they too have been taken in by these dancing sirens.”

“The true magic of this performance was not in the acrobatics or feats of strength and movement. It was in the beautiful building of tension and anticipation that the performers were actively whipping up in their audience. “Mesmerizing” is the word that comes to mind, but that would be a crime of understatement.”

“Callings, a piece on superstition and then search for meaning, is lyrical, acrobatic, and extreme, using ropes and oars to evoke the ocean as the dancers tower in the airy reaches of artificial height.”

“It is a combination of dance and theater, a representation of reality, which ultimately responds in unison with the applause of the audience.”