About MEDITATIONS FROM A GARDEN SEAT 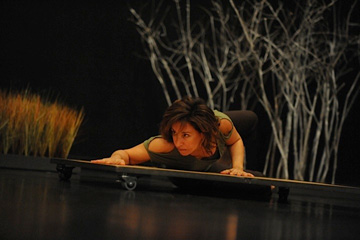 “Often women in prison think of themselves as weeds; everyone outside wants to get rid of them.” – Judy Dworin

“For me the garden was a place of healing to the soul… it brought comfort to the heart blistered by the sultry suns of life,”  –Harriet Beecher Stowe in her 1855 essay “Meditation from Our Garden Seat.”

What kind of courage does it take to face an irrevocable mistake and survive its consequences?  MEDITATIONS FROM A GARDEN SEAT reflects upon women in prison who have been identified by their bad choices as they struggle with the daily reminder of their actions. The stark reality of women’s lives behind the razor wire and the healing seeds of redemption are explored in the interwoven language of dance, innovative set elements and spoken word. Juxtaposed with the words of that historic icon for emancipation, Harriet Beecher Stowe, this work was developed from a residency by the Judy Dworin Performance Project with women serving time at York Correctional Institution in Niantic CT – women whose prison garden has become a remarkable source of healing, regeneration, and through work with JDPP – artistic inspiration 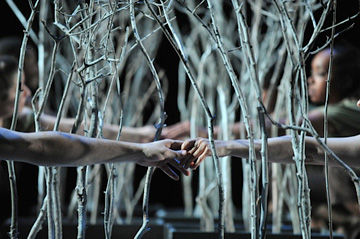 JDPP is an arts non-profit based in Hartford, CT, founded by Judy Dworin in 1989.

It is an organization of professional artists who—on stage, in schools, in prisons and in the community—innovate, inspire, educate and collaborate.  JDPP harnesses the arts as a powerful catalyst for creative expression through performance, community building and positive change.

JDPP is the home for three distinct programmatic offerings.  The Ensemble inspires change through innovative, movement-based performance on stage that examines social and personal issues of our time; the Moving Matters! Residency Program brings dance/theater into schools through collaborative projects and arts education programs that explore movement and the creative arts as tools for learning and personal growth; and the Bridging Boundaries Arts Intervention Program couples arts intervention with social work, to bridge the forced separations of populations affected by incarceration. 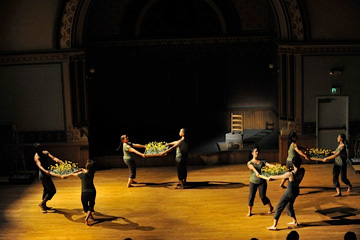 Judy Dworin (Executive and Artistic Director) founded the Judy Dworin Performance Project, Inc. (JDPP) in 1989 based on a commitment to the important role the arts can and do play in challenging and creating change in our universe – personal, educational, and global. In addition to her work as Artistic Director of the Ensemble and a lead teaching artist for several of JDPP’s residencies, Judy has taught in Bulgaria and Taiwan as well as throughout New England. She is on the Teaching Roster for the State of Connecticut and is the recipient of many awards, the most recent being an honoree of the Connecticut Women’s Hall of Fame. Her commitment to education has also had a forty-one year history at Trinity College, where she established the Dance Program, co-founded the Trinity/La MaMa Performing Arts, Semester in New York City, and chaired the Department of Theater and Dance for many years. She recently contributed a chapter to the book, “Performing New Lives: Prison Theatre”, edited by Jonathan Shailor, and published by Jessica Kingsley Publishers that discusses the initiating JDPP project with the women of York Correctional Institution that has catalyzed a powerful trajectory of Judy’s work with the incarcerated and their families.

Blu (Lighting Design) lived in NYC for 20 years where he was resident designer at the Cubiculo and La MaMa E.T.C., was a Bessie Award winner, and lighting designer for such renowned dance theater artists as Eiko and Koma, Ping Chong, Donald Byrd, Sally Gross, Nancy Meehan and Paula Josa Jones to name a few. He now lives in Bloomfield, CT with his wife, Judy and their family of dogs, turtles, fish, birds, frogs, toads, and bats.

Kathy Borteck Gersten (Associate Artistic Director) has been collaborating with Judy Dworin since 1986. She was a founding member of Dance Services Network and its Director for 6 years, Past Dance Vice President for the Connecticut Association for Physical, Health Education, Recreation and Dance, on the Artist selection panel for First Night Hartford, Dance Committee member for the Connecticut Standards for Dance and the State Guide to Arts Program Development K-12, Dance Certification Committee member for the State Dept. of Education, Artist panel for Art/Artists Residencies, Arts Development Grants, and a board member of the Connecticut Dance Alliance.  Currently, Kathy is a Teaching Artist and co-coordinator in JDPP’s Moving Matters! Residency in Hartford schools, as well as York Correctional Institution, Hartford Performs and, is a guest lecturer in the Department of Theater and Dance at Trinity College. Kathy received the 2009 Distinguished Artist Award from the CT Dance Alliance and is a Master Teaching Artist for the CT Department for Economic and Community Development Office of Culture and Tourism’s Office of the Arts. She is a member of the Greater Hartford’s Dance Umbrella and board member of JDPP.

Robert Byrd (Ensemble) Robert Byrd is a New Haven native whose love for dance and drama has been instilled and evolving since childhood.  Although not formally trained in dance, Robert served as member and co-captain of New Haven’s Mob Squad Drill and Drum team for over 7 years, where he performed competitively in front of large and small crowds, leading his team to numerous victories.  He made his dance debut in JDPP’s production of “In This House,” playing the role of Adam Jackson.  Robert is embarking on  the study of many dance forms such as African, Caribbean and also Modern. He has appeared in many performances with Sankofa Kuumba, and the Caribbean American Dance Company and is a new company member with DancEnlight.

Mellissa Craig (Ensemble) is a Hartford native who holds a Bachelor of Science in Biology from Trinity College. She began her dance career with Cultural Dance Troupe at age10.  Today Mellissa is a dance instructor for JDPP’s Moving Matters programs and at the Greater Hartford Academy of the Arts Elementary and Middle schools.  She has also participated in workshops and performances for Sankofa Kuumba, Hartford Public Schools, New Britain Parks and Recreation, and the Multicultural Arts and Technology program at CCSU.  Additionally, she is a trained stilt walker and has conducted numerous classes and workshops for students across the country and abroad, as far as Cape Town, South Africa.

Heidi Klecak (Ensemble) is a graduate of the University of Connecticut and the Hartford Conservatory, and has attended Wesleyan University taking graduate courses in Dance and Movement Studies.  She has served on the dance faculty of Eastern Connecticut State University, Saint Joseph College and The Hartford Conservatory among others.  She currently is owner and Director of the Stafford Academy of Dance LLC, and Directs the Figments Youth Dance Ensemble.  Heidi also teaches creative movement at the Preschool for the Arts in Ellington and Tolland, and choreographs a musical production for children each summer with Act Out, Sing and Shout.

Tracy Lombardo (Ensemble) received a BFA from Adelphi University. She performed with Adelphi Dance Theater for two years, studied with Frank Hatchett for one year and participated in a Broadway Dance Center Showcase in NYC. Tracy also performed with Sonia Plumb Dance Company for five years. Presently, Tracy is teacher and choreographer of New Steps Dance Center in Glastonbury as well as JDPP’s residency programs for youth with Incarcerated parents and Parkville Community School.

Lisa Matias (Ensemble) received her BA from Trinity College, Hartford, CT., where she was awarded the President’s Fellowship in Theater and Dance. She has taught and performed with several companies throughout the Northeast. Lisa currently teaches at Trinity College and at her own studio, Lisa Matias Dance Centre.  Lisa has been with JDPE since its inception and continues to be inspired by Judy’s work.

Alexa Melonopoulos (Ensemble) began her dance training with Estelle Jones. She earned her BA in Dance from Hofstra University and holds an MA in Dance in Higher Education and Administration from New York University. She has had the opportunity to perform with choreographers Eleo Pomare, Remi Charlip, Rosalind Newman, Robin Becker, Stormy Brandenberger, Lance Westergard, Lili Weiss, John Mead and Ching Wen Yeh. Alexa has been affiliated with a number of groups including Washington Square Repertory Dance Company, Sonia Plumb Dance Company, and Works / Laura Glenn Dance. She is currently the Director of Dance and Arts Department Chair at Miss Porter’s School in CT.

Christine Perry (Ensemble) originally began her dance training in her home state of NH at Southern New Hampshire Dance Theater. She graduated Magna Cum Laude from the Hartt School at the University of Hartford with a BFA in Dance Performance in the Spring of 2009. She also had the privilege to train at the Martha Graham School of Contemporary Dance on scholarship. She worked with Graham legends such as Denise Vale, Donlin Forman, Steve Rook and Peggy Lyman Hayes and performed such famous repertory including Diversion of Angels and Night Journey. Along with dance she is a professional stage and production manager and has done extensive technical theater work in locations across the Northeast. Christine is currently in her third season for Hartford based modern dance company dancEnlight under the direction of Lorelei Chang. She is also currently a faculty member at Premier Dance Theatre, West Hartford CT and Limelite Dance Center, Wetherfield CT and is Waterfront Supervisor and Programming Coordinator for the Town of Chester Parks and Recreation.

Marcela Oteiza Silva (Scenic Design) is an Interdisciplinary visual artist and Professor of Theater Design at Wesleyan University Connecticut, USA.  Marcela received her BA in Fine Arts at the University of Chile. She earned a MFA in Design for performing arts at California Institute of the arts (CalArts). Her grant awarded pieces are Interdisciplinary performances, including collaborations with composers and choreographer to create hybrid works, such as: “The heart play” by Heiner Muller a music-based dance theater piece (composer Alba Triana) And “Pornographic Angel” with director Claudia Tatinge Nascimento, a digital media and performance play. As a designer she has worked in over twenty productions for theater and Dance. Marcela has an extensive visual art exhibition record, both in the US and abroad.

Jeff Shortt (Ensemble) is a 22 year old music student; he has been a gymnast for 18 years, and studied dance for 15.

Kathy Wyatt (Guest Performer) Kathy was a resident at York Correctional Institution and is now employed as the Volunteer Coordinator for CCAR (Connecticut Community for Addiction Recovery). She is an active member of the Connecticut Coalition for Judicial Reform and the Windham Reentry Roundtable. While at York she participated in Wally Lamb’s writing group and two of her pieces are part of his latest anthology of writings by York women entitled “I’ll Fly Away: Further Testimonies from the Women of York Prison which received the Connecticut Book Award last year. Kathy participated in all of the York residencies of the Judy Dworin Performance Project during her time there and was a writer and narrator in the performance pieces that culminated each residency. She has performed her work ‘Love Letters’ at the Warner Theater in Torrington as part of a fundraiser for Chrysalis programming at the prison, at 40 Forward! at Trinity College, as well as Wesleyan University, Eastern Connecticut State University, and UConn.