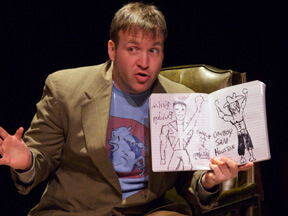 Click here for a 6 minute video preview. And here for the 2 minute minute version.

We are fortunate, indeed, for Lewis to fit us into his busy schedule! Much in demand, Lewis’ first breakout piece, KILLADELPHIA was about the murder epidemic in Philadelphia. In it he developed his signature documentary mixtape style, playing all the parts himself – including convicted murderers, their victims, Mayor Nutter, local rappers, conservative talk show hosts, trauma surgeons, and the citizens of the City of Brotherly Love in style of performance dubbed by one reviewer as a “one man NPR.”

In JUST KIDS, while spending lonely weeks in Kansas teaching a group of mentally-troubled kids, Lewis is pulled into a sudden rush of discoveries about his own unsettling  past. Lewis’ long-estranged biological father forces him to endure the strife of their troubled relationship one more time, before leaving Sean to pick up the pieces and figure out what it all means. A multi-media exploration of abuse and becoming our parents; an evocation of the charming, alcoholic father in a piece that invokes the courage it takes, yes, to work with teens with issues, but also to acknowledge the presence in his own life of the same triggers that have damaged the youth with whom he works – all in his signature mixtape style, full of true stories and characters who bring both laughter and tears.

“Everything I see Sean Lewis in trumps the last thing which already hit me so hard my teeth rattled.  And this take on his father through different stages of his life is a damn tour de force.  His portrayal of “Rick” is searing but with a deep empathy and massive amounts of charm…  The writing crackles like everything he does but there’s a much stronger use of space and silence this time, the pauses make everything feel lived in and Matt Slaybaugh’s direction balances that without letting the audience catch our breath.” ––Sanford Speaks    Scroll down for additional press accolades. 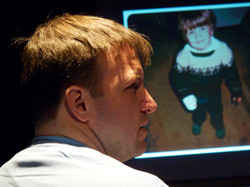 SEAN CHRISTOPHER LEWIS is a Solo Performer/Playwright/Director who can be heard as a commentator on NPR’S This American Life. His plays have won the Kennedy Center’s Rosa Parks Award, the 2010 National New Play Network’s Smith Prize, the NEA Voices in Community Award, a Puffin Foundation Artists Award, a Barrymore Award from the Theatre Alliance of Greater Philadelphia, a Central Ohio Critic’s Circle Citation for Best Touring Production, a Central Ohio Critic’s Circle Citation for Best New Work, a National Performance Network Creation Fund Grant, the William Inge Fellowship and more. He served as National New Play Network Emerging Playwright in Residence at Interact Theatre in Philly and as Playwright in Residence at the William Inge Arts Center in Independence, Kansas.

He has been a playwriting fellow at the O’Neill Playwrights Conference and has had his work developed at the PlayPenn New Play Conference, Lark New Play Development Center, Orlando Shakespeare Festival’s Harriet Lake Festival of New Work and at the National Center for New Plays at Stanford University. He is currently under commission with Davenport Theatricals, Interact Theatre, Hancher Auditorium, the National New Play Network, Horizon Theatre and the National Czech Slovak Museum.

Lewis is also a noted actor, working Off Broadway at the Pearl Theatre, in NYC at La MaMa ETC, regionally with companies like the Pennsylvania Shakespeare Festival, in television and feature films from COMEDY CENTRAL’S Upright Citizen’s Brigade to GOD’S COUNTRY and his work has been nominated for the Fox Foundation Fellowship and the Princess Grace Theatre Fellowship.

“Best Original Work of 2011: JUST KIDS- Sean Christopher Lewis’s one-man show, shaped with the help of director Matt Slaybaugh, was a deeply personal examination of the roots of violence.
– The Other Paper

“Brilliant” – The Other Paper