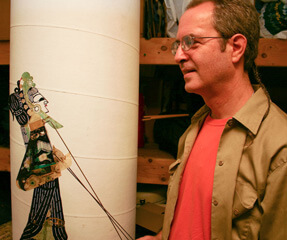 This workshop is an introduction to the theory, history and practice of Shadow theater — led by Stephen Kaplin, one of North America’s leading practitioners of this ancient art form.  The dynamic interplay of the various elements of shadow performance— light source, filter, lens, image in motion and focal surface– will be explored in all their complexities.  Subjects will include:

Workshop participants will design and construct shadow figures, masks and scenic projections (for overhead projectors and direct screen) to be part of a collectively conceived theatrical performance that will be presented to an invited audience. 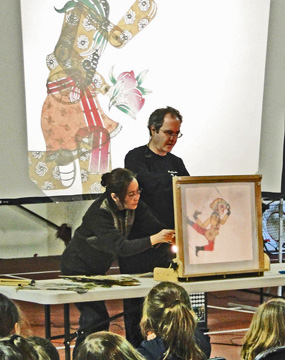 Stephen Kaplin studied puppetry at UCONN under Dr. Frank Ballard and graduated in 1979. He received an MA in Performance Studies from New York University in 1989. Since 1981, he has lived in New York City, working in all aspects of puppet theater. His professional credits include: building shadow figures and puppet sequences for Julie Taymor’s Lion King, Juan Darien, Liberties Taken, The Transposed Heads and The Green Bird; designing and building giant puppets for TIMES SQUARE 2000 (Michael Curry, dir.); designing shadow sequences for Lee Breuer’s Peter and Wendy; co-design and construction of puppets for the Public Theater’s The Tempest and The Caucasian Chalk Circle (George Wolfe, dir.); shadow puppet designs for Band in Berlin (Susan Feldman & Pat Birch, dirs).  In 2006, his puppet designs for Ping Chong’s Cathay: Three Tales of China. won a Henry Hewes Award for Notable Effects from the American Theatre Wing.

Kaplin has been the co-Artistic and Technical Director of Chinese Theatre Works since its founding in 2001– designing sets and puppets, as well as co-directing and performing all  major CTW productions. His CTW 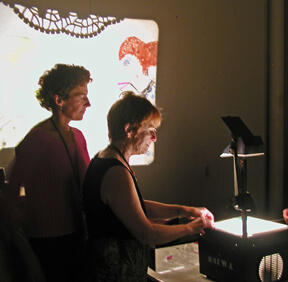 Kaplin is a co-founding member  and co-artistic director of Great Small Works– a collective of theater artists dedicated to stretching the boundaries of live and puppet theater in New York City since 1995.  His ongoing work with GSW include: production and performance for numerous monthly Spaghetti Dinner Cabarets (Obie Award Special Citation) and ten Toy Theater Festivals (UNIMA Citation of Excellence); giant puppet pageants including A History of Apizza in New Haven and The Bread and Roses Pageant; toy theatre productions such as Santa Klas Hot Gehellisht, B.B. in L.A, Toy Theater Faust, Olivier’s Hamlet and Terror As Usual– Episodes #1-13 and A Walk in the City (UNIMA Citation of Excellence); puppet production and performance in large scale productions such as The Man Who Was Thursday and A Mammal’s Notebook: the Eric Satie Cabaret.

His articles in puppet theory and history appear regularly in Puppetry International. His book (written with Kuang-Yu Fong), Tabletop Theater: Puppetry for Small Places, was published in 2003.  He was a guest instructor at the University of Maryland, College Park (occupying the Jim Henson Chair for puppetry together with Ms. Fong.) He has curated two major exhibitions of puppets: “Puppetry of Shadow and Light” (2005) at the New York Public Library for the Performing Arts; and “With and Without Strings” (2007) at Flushing Town Hall and “red Gate: Pauline Benton and Chinese Theater” at the Ballard Institute and Museum of Puppetry (2012). He has also co-curated and designed Toy Theatre Exhibitions at the last three Great Small Works International Toy Theater Festivals (2006, 2008 and 2010).