About ME, MISS KRAUSE AND JOAN

Deep personal experience is fertile ground for acting, but usually an actor’s source of inspiration is hidden from the audience. ME,MISS KRAUSE AND JOAN reveals what goes on in an actor’s homework, in search of answers to the question, “How would I play Joan of Arc?”

The performance weaves scenes from the life of Joan of Arc with moments and people — particularly one special teacher, Alvina Krause—from the performer’s life experience. Structured around these pivotal moments of Kemper’s education as an actor, the piece is a complex interplay of light and, significantly, darkness: in the re-living of a rape that took place as the actress walked home from a performance, woven into the trial of Joan of Arc.

Ultimately, the tapestry of experiences reveals a theme: the knowledge that there are things so true and so eternal that no violence can kill, so real and so important they can never die.

The piece has been performed in many venues including the 2008 Philadelphia Fringe Festival, the Mid-Atlantic American Association of Women Studies Conference, the University of Houston-Clear Lake, Gettysburg College and at the Jung Center of Houston. It has also been performed in many Quaker settings including Pendle Hill Quaker Study Center, and the Friends World Committee For Consultation gathering in Bhopal, India.

The play is a recipient of a grant from the Jillene Ringle Solo Performance Program, administered by 1812 Productions of Philadelphia.

Martha Lee Kemper is a theatre artist and educator who lives in Philadelphia. Prior to that Kemper spent 5 years in Bloomsburg ,PA, where, with fellow actors she studied with Alvina Krause, a legendary acting teacher whom John Guilgud is rumored to have called “the best kept secret in the American theatre.’ Under Krause’s artistic direction, Kemper was, along with fellow Ko Festival performer, Laurie McCants, a founding member of the Bloomsburg Theatre Ensemble. She participated in the company as an ensemble actor, teacher and director. Roles there included Masha in THE SEA GULL, and Lady Audley in LADY AUDLEY’S SECRET, both directed by Alvina Krause, Mrs. George in GETTING MARRIED, directed by Gerard Stropnicky, Kristine Linde in A DOLL HOUSE, directed by John Chism, and Polly Garter (and other characters) in UNDER MILKWOOD, directed by Rand Whipple. She directed a touring production of Shaw’s PYGMALION, and led workshops in the Pennsylvania schools where the show toured. In BTE’s apprentice program she created acting classes in Shakespeare, Chekhov and Shaw.

Since moving to Philadelphia, Martha Kemper has performed frequently with InterAct Theatre, one of Philadelphia’s most respected theater companies. Credits there include FEAST OF THE FLYING COW, directed by Seth Rozin, Ayat in GOLIATH by Karen Hartman, a reading directed by Lisa Jo Epstein in their Israeli/Palestinian play festival, and participation in their “Writing Aloud” series, reading stories by regional writers., Performances with Theatre Catalyst include the premieres of THE CHILDREN OF FATIMA and THE BALLAD OF JOHN WESLEY REED, the Eternal Spiral Project’s production of I STAND BEFORE YOU NAKED by Joyce Carol Oates and Charles Ludlam’s BROTHER TRUCKERS. Other Philadelphia performances include the Wilma Theater’s EVERY GOOD BOY DESERVES FAVOR, directed by Jiri Zizka and two Philadelphia Fringe productions written by Arden Kass: THIN ICE, and WINGSPAN. Her earlier one woman show, ‘WHY I LIVE AT THE P.O.’ AND OTHER STORIES BY EUDORA WELTY, an adaptation of three stories by Eudora Welty, toured colleges, universities, theatres and other US venues. With the Welty piece, Martha was selected as a Roster Artist for the Pennsylvania Performing Arts on Tour, an organization linking presenters and artists who ‘maintain the highest standards of artistic quality and professionalism.’ 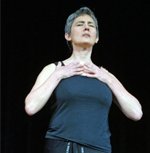 Currently, as Associate Professor of Theatre at Penn State Abington College, Kemper’s special interests in teaching are Acting, Women and Theatre, and Theatre in Diverse Cultures. Productions she has directed at Penn State Abington include THE MISER,WORKING, RHINOCEROS, MARISOL, THE TEMPEST, A RAISIN IN THE SUN, LYSISTRATA AND PYGMALION. Kemper holds a Bachelor of Speech Science from Northwestern University and an MFA in Acting from Penn State. In addition to the five years of theatre study with Alvina Krause, training includes Linklater voice work with Leigh Smiley in Philadelphia and with Shakespeare and Company; workshops in Clown and Mask with Jane Nichols & Karen Beaumont at Shakespeare & Co. and in Philadelphia with Emmanuelle Delpech-Ramey; and a seminar for Women Playwrights with Lisa D’Amour at “Voices and Visions” in New York.

Want to know more about Martha? Click HERE to visit her webpage.

WHAT THE PEOPLE ARE SAYING ABOUT THIS SHOW:

“ME, MISS KRAUSE AND JOAN is a brilliantly witty and poignant “portrait of the actress as a young woman;” my theatre students closely identified with the dreams of the young performer, and were profoundly moved by the story of how her passion for theatre redeemed her, in a sense, as she faced a very dark night of the soul.”
– Dr. Susan Russell, Chair, Department of Theatre Arts, Gettysburg College

“…I would highly recommend this play to the organizer of any state or national conference dealing with the sensitive and complex matter of sexual assault.”–Beatrice Black Exec. Director Women and Children’s Alliance, Boise Idaho

” The play is very inspiring on many levels, but as a psychologist, the themes that most interest me are its demonstrations of the triumph of the spirit over trauma and adversity, the modeling of a person learning how to remember, integrate, and express her experiences, the claiming and losing and reclaiming of one’s voice, and the play’s incarnation of empowerment even in the face of oppression.” — Mona Cardell, psychotherapist, Philadelphia

“… How could I have known…that I would be in the hands of a master. I was trying to figure out all the next day how I could get word to the Pulitzer committee. SOMEONE should know about this play.” – Lee Herrick, Director of Development, Jung Center, Houston