OUT OF THE PAST: Celebrating 40 Years
of the Mettawee Journey

Performed by The Mettawee River Theatre Company
under the direction of Ralph Lee.

On the Amherst College Observatory Lawn off of Snell Street in Amherst.
Bring blankets, lawn chairs and insect repellent, but leave the dogs at home!

No reservations necessary! (Unless the weather looks iffy on the day of the performance) 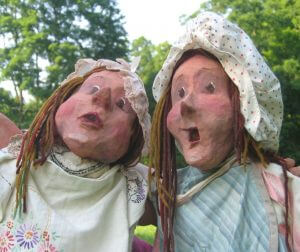 In their last year of regular touring, our annual favorites, the Mettawee River Theatre Company, The outdoor show will include scenes and songs from four decades of Mettawee productions. Suitable for all ages. the show will feature appearances by Aristophanes’ gluttonous dung beetle, as well as Brecht’s forlorn lovers in THE CAUCASIAN CHALK CIRCLE. The world will be created on the back of a turtle; the great Irish sea god Mannanon will declaim the tragic tale of Phaedra; Grandmother Earth will send Nanabozho off to get the world ready for humans, Archy the cockroach and his lowly associates will share memorable moments from their illustrious careers, and two long lost brothers will be reunited in VALENTYNE AND ORSON.

The production will incorporate an array of giant figures, puppets and masks and will be performed out under the stars within a landscape permeated with live music, song and a spirit of celebration. 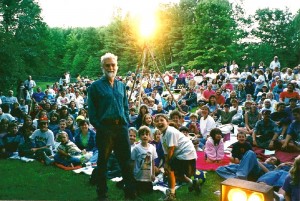 The Mettawee River Theatre Company, founded in 1975, creates original theater productions which incorporate masks, giant figures, puppets and other visual elements with live music, movement and text, drawing on myths, legends and folklore of the world’s many cultures for its material. The company is committed to bringing theater to people who have little or no access to live professional theater. Each year Mettawee presents outdoor performances in rural communities of upstate New York and New England as well as performing in the New York City area. 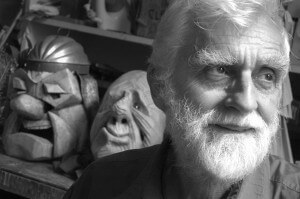 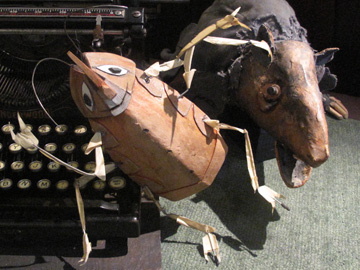 From February through May, 1998, the New York Public Library for the Performing Arts at Lincoln Center presented a retrospective exhibition of Ralph Lee’s work that attracted record-breaking crowds to the gallery. As part of the Henson Foundation’s International Festival of Puppet Theater, the Children’s Museum of the Arts featured an exhibition entitled “The Masks and Magic of Ralph Lee” in September, 1998. During 2000 there were three exhibits in New York City featuring creations designed by Ralph Lee for Mettawee productions. Masks and puppets from The Woman Who Fell from the Sky were on exhibit in the ambulatory of the Cathedral of St. John the Divine; an array of giant figures were display in the Courtyard Gallery of the World Financial Center, and an exhibit of sketches and models were in the gallery of The Kitchen.