About D-GENERATION: An Exaltation of Larks

D-GENERATION: An Exaltation of Larks is Sandglass Theater’s newest production is a piece about dementia. It is also a piece about play, joy, and communication.The production is based on stories written by groups of people with late-stage dementia gathered by Sandglass Theater’s performers during 20 visits to care facilities. During these visits, circles of people with dementia were guided through a collective story–making process called “Timeslips.”  In this process a circle of people with dementia is shown a photograph.  They are then asked what they would like to say is happening in the picture.  There are no wrong answers. Everything they say is included in the story – every word. The stories that result are are associative and non-linear. They reveal humor and playfulness, as well as the darker side of the disease,  These stories, combined with the compelling process of writing them, have formed the inspiration for D-GENERATIONThe piece uses an original score and original video segments that take us into the world of people who live with dementia.   It is performed by cast of puppet characters who are residents of a nursing home who have been asked to be part of a “Timeslips” process. Sandglassensemble members play their caretakers.

Directed by Salvadoran director Roberto Solomon, the piece explores the rich creative potential and ability to communicate that exists even in people with late-stage dementia. Their creative imaginations, yield words and images that are poetic, humorous, and quite mysterious.  Sandglass Theaterhas used this work to create a piece that reflects both the stigma and the emergence, the despair and the joy, that is equally present and possible, in both the person with dementia and in their caregivers and family members.Sandglasshas received funding for the piece from the National Endowment for the Arts, The Jim Henson Foundation, The Clowes Fund, and Fresh Sound Foundation.

Sandglass has received funding for the piece from the National Endowment for the Arts, The Jim Henson Foundation, The Clowes Fund, and Fresh Sound Foundation. 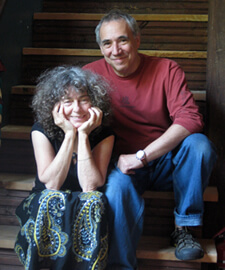 Sandglass Theater is an internationally known theater company specializing  in combining puppets with music, actors and visual imagery. Since 1982, the company’s  productions have toured 24 countries, performing in theaters, festivals  and cultural institutions and winning numerous international prizes. Sandglass produces works for both adult audiences and  young audiences—two repertoires that tour separately and together.  Sandglass also performs and teaches in its own 60-seat renovated barn theater in Putney, Vermont.

Sandglass Theater  is a member of the Network of Ensemble Theaters and the National Performance Network.

Roberto Salomon, Director Since 2003, Roberto Salomon has directed the Teatro Luis Poma, the first privately owned theater functioning year-round in his native El Salvador.  In Geneva, Switzerland, he has been directing and teaching theater for the past 25 years.  This is his third production with Sandglass Theater.

Eric Bass, Performer Co-Founding Artistic Director of Sandglass Theater, has worked for thirty years as a director, playwright, performer and mask and puppet maker. In 1982, Mr. Bass founded the Sandglass Theater in Munich, Germany, with his wife, Ines Zeller Bass. As a director, Mr. Bass has worked in America, Australia, Poland, and Finland, as well as the United States. In 1991, Mr. Bass was awarded the Figurentheater Prize of the City of Erlangen, Germany for his contributions to the field of puppet theater. He directed The Story  of the Dog, a collaborative piece between Sandglass Theater and Sovanna Phum Theater in Phnom Penh, Cambodia, which toured Cambodia in 2005 and premiered in the US in the Fall 2006. He served for 5 years on the steering committee of the Network of Ensemble Theaters. Eric has been the Festival Artistic Director of the Puppets in the Green Mountains Festivals. In 2010, Eric received the Vermont Governors Award for Excellence in the Arts.

Ines Zeller Bass, Performer  Co-Founding Artistic Director of Sandglass has been creating and performing with puppets since 1968, when she became a member of the Munich marionette theater, Kleines Speil.  In 1978, she created her children’s hand puppet theater, Punschi, which has toured Europe and America. In 1982, Ines co-founded Sandglass Theater with husband Eric in Germany and moved the theater to Vermont in the mid-1980s. Ines is the Director of Sandglass Theater’s children’s programs, collaborates with Eric on all of the theater’s programming, works with local school children, and directs workshops and residencies for puppetry students. She is a UNIMA citation winner and in 2010, received the Vermont Governor’s Award for Excellence in the Arts.

Kirk Murphy, Performer has a degree in Theater Arts from Antioch College.  He has interned with Redmoon Theater in Chicago, In the Heart of Beast Theater in Minneapolis, as well as Sandglass Theater.  In 2006 he joined Sandglass Theater in 2005 as both Administrator and Puppeteer.  He performed in Sandglass Theater’s The Story of the Dog, a cross-cultural collaboration with Cambodian shadow puppet theater Sovanna Phum.  He has also performed in Amanda Maddock’s Mrs Wright’s Escape, Company of Strangers’ Styles Under Sky, and developed a repertoire of short pieces and the full length piece Undone. He is a certified facilitator of TimeSlips (a creative storytelling method designed to be used with people with dementia and their caregivers), and has been a part of the D-Generation project since its earliest stages.

Coni Richards, Puppet Builder sculptor and digital photographer, has been involved in the D-Generation puppet process for about one year. She crafted the faces and hands of the five characters prior to the creation of the script. Her current enthusiasm for digital photography has provided Sandglass with many images of ongoing work.

Michel Moyse, Filmmaker has worked as a free-lance Sound Designer in feature films with such directors as Woody Allen, Brian DiPalma, Jonathan Demme, George Roy Hill, and as a film editor for Cappy Productions, NYC. He was co-founder and Vice President of Domilin Films, Inc., a New York based film acquisition and development company. Presently, Moyse is founder/co-Director of the Center for Digital Art, a non-profit educational organization dedicated to providing resources and promoting filmmaking, animation and videoart in Southern Vermont.

Sabrina Hamilton, Lighting Designer is the Artistic Director of the  Ko Festival of Performance. Lighting credits include the New York Shakespeare Festival, the Goodman, the Cincinnati Playhouse and 7 years as the Route Lighting Designer for New York’s Village Halloween Parade under the direction of Ralph Lee. International lighting credits include work in: Bologna, Florence, Milan, London, Grenada, Geneva, Paris, Rio de Janeiro, Amsterdam, Brussels, Cardiff, Edinburgh, Bristol, Havana and  Hong Kong.   Her directing work, primarily original pieces, has been seen in New York, Berlin and throughout New England. CRAVINGS: Songs of Hunger & Satisfaction is currently touring to great acclaim. She is the director of INDUSTRIOUS ANGELS

The Residents of Holton Home, and Pine Heights Center  We would also like to acknowledge those who created the stories and the inspiration for the direction of this project.

In the microcosm of theater, the puppet is a means of integrating, of pulling back together pieces torn apart from each other. The puppet is the embodiment of a world no longer ours, an abstraction of a memory, a dream which is recalled. It is other than us, but it lives through us. We grasp it, and in grasping it, it takes hold of us. In dancing with the puppet, we are dancing with our more secret side. We are integrating parts of ourselves. —Sandglass Theater

…these astonishing creatures… which are in reality our doubles, our secret brothers, sprung from a shadow within us…one learns more…than from the many laborious works on the human condition that are proposed to us by philosophers, psychoanalysts and psychologists. —Dernieres Nouvelles D’Alsace, Strasbourg, France

Eric Bass is known all over the world today for having brought puppets out of their traditional toy closets. His shows are each time more stunning…. Like all great art, it is a constellation of humorous touches and tenderness. The magic is born of gesture, from the movement of these dolls, as if they were animated, with the real breath of life. —Le Courrier, Geneva, Switzerland