The depths of mankind’s last unknown frontiers – outer space and a grieving heart – are explored in this brave and funny new play about a woman’s courageous solo journey to Mars.

In 2010, a bill was signed in the United States authorizing manned missions to the planet Mars by 2030s.  But, the reality of such a trip comes with a catch – such a flight would take over eight months, would be performed solo and would offer no return trip.

In SPACEMAN, the difficulties of interplanetary space travel are brought to life in exacting detail.  Radiation exposure, long term weightlessness, low light, extensive communication delays and poor hygiene are just a few of the challenges astronaut Molly Jennis must face as the first to Mars.  But she soon finds nothing compares to the psychological effects of having so much time alone.  Time spent mulling over the decisions she has made and what might be waiting for her when she finally reaches her destination.

“We’re all humans and the idea of sending one of our kind on a trip like that would be a wonderful adventure
for the entire world. the whole world would get behind it.
– James McLane, Former NASA engineer discussing a one-way, solo trip to Mars 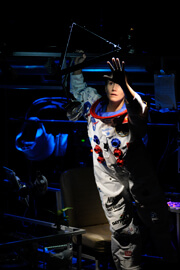 Loading Dock was formed by playwright/director Leegrid Stevens and actor Erin Treadway.  The primary focus of Loading Dock is to create original plays that explore the extremes in human behavior.  The company often juxtaposes ancient mythology with modern social thought and convention to explore the conflicted relationship of the modern man to his/her more primal instincts.  While grounded in the traditions of realism, Loading Dock does not subscribe to a universal or stable reality but instead seeks to present the warped realities of its subjects as they perceive the world.  These augmented realities are created using both traditional and innovative theatrical conventions.  Avant-garde and experimental techniques such as exploratory language, contradictory or non-linear narrative, video and experimental sound are combined with the theatrical traditions of complex, emotionally expressive characters, recognition and reversal, and focus of action that were established by Sophocles, Anton Chekov, and Tennessee Williams. Visit Loading Dock’s website here.

Leegrid Stevens (playwright/director/sound design) grew up in the hill country of Spicewood, TX.  He moved to New York for his MFA at Columbia after attending SMU in Dallas. He now lives in Brooklyn.  His plays have been seen in downtown theaters in New York including HERE Arts Center, Incubator Arts Project, Lark Theatre, Altered Stages, Theatre for the New City, among others both nationally and internationally.  You can find some of his plays in print including Post-Oedipus (Playscripts), Leda’s Swan (Stage Tribes, Theater-Verlag Desh Publishers), Sun Stand Thou Still (Plays and Playwrights 2004), and The Dudleys! (Indie Theatre).  Leegrid has been the playwright in residence at Tutto Theatre in Austin in 2011 and 2012.

Erin Treadway (performer) is a Texas-born, Brooklyn-based actress and frequent collaborator with playwright/director Leegrid Stevens. Their most r

Carolyn Mraz (set design) is a New York-based set designer of theater and live performance.  Interested in the aesthetic development of experimental works, she often collaborates on world premieres of devised pieces, new plays, and radical reconstructions of classics. Other credits include: Life is Happening to Us Again (A Host of People), Acquainted With The Night (Rachel Chavkin, director), The Puppet Show (Target Margin Lab at The Bushwick Starr),  Anne Frank (Curtain Call Theater),  TIME! (and/or progress?) (Ida Nowhere, Berlin, Germany), Attack Of The Soccer Moms (Edinburgh Fringe), Powerhouse (Sinking Ship Productions), and The Name Means Public Spirited (Target Margin Lab at HERE). and  Target Margin Theater’s The Haunted Inn at the Henry St. Theater, Abrons Art Center. Carolyn is an Oberlin College alum with an MFA in design from NYU Tisch.  As the associate set designer of the O’Neill National Playwrights Festival, she has illustrated scenic renderings for each reading of 2011 and 2012.  Involved in many capacities over the last 6 years, Carolyn is a proud associated artist of Target Margin Theater.

Rabiah Troncelitti (costume design) is a freelance costume designer and stylist based in New York  interested in telling stories and creating characters, whether it be for entertainment or advertising. Her design background is in theatre and dance but her experience extends into film, commercials and print. She holds an MFA  NYU Tisch in Design for Stage and Film and is fluent in French and Italian. Credits include designs for BAM, The Culture Project at Arena Stage, the 78th Street Theatre Lab, and the Alvin Ailey American Dance Theatre. She is a member of the theatrical  design union, USA Local 829.

“Embodying this gallant heroine is Erin Treadway, in a performance of extraordinary range and depth and mettle: this is one of the most astonishingly controlled and nuanced pieces of acting I have seen in a very long time, and anyone interested in seeing a fine actor at the peak of her powers will want to catch Spaceman and witness Treadway’s work.” –Martin Denton, nytheatre.com
Link to full review

“Demon­strating extraordinary range and stamina in the role, Treadway rides a harrowing emotional seesaw
while holding the audience’s focus confi­dently. Her performance leads the audience to experience some thrill­ing tensions.
–Aaron Grunfeld, The New York Review of Science Fiction December 2012
Link to full review – but spoiler alert: you may not want to read page 2!