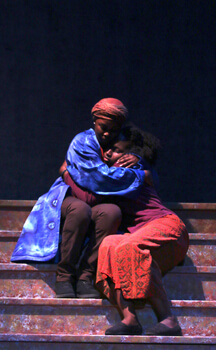 FIRST GENERATION is an ensemble of young artists based in Springfield, MA. Current ensemble members range in age from 16 to 25 years old and originate from Haiti, Burundi/Rwanda, Puerto Rico, Guinea, South Sudan, and the U.S.

TENDERNESS, is a multi-lingual, physical theater piece, that underscores the dehumanization at the core of all violence, and the connection between racism, the school-to-prison pipeline and mass incarceration in contrast with the eternal power of human tenderness and connection. Tenderness incorporates movement, music and text in six languages: Arabic, Mandingo, Kirundi, Creole, French,  and English.

About the FIRST GENERATION program of the Performance Project 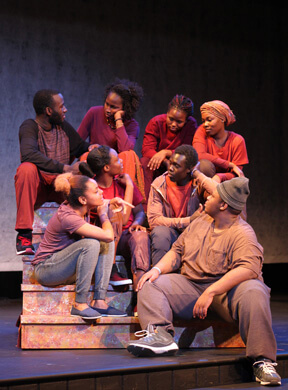 First Generation is an intensive, arts and youth leadership development program in Springfield, MA that provides a platform for young adults to claim a public voice in their community, and beyond.

There are many ways to be “first generation.” Ensemble members may be the first in their family to grow up in the United States, the first to speak English, to graduate high school, go to college, to be incarcerated, be drug free, be openly GLBT, to break the silence, to be an artist, a feminist, or many other firsts.

First Generation addresses the complexity of embracing individuality while honoring one’s family and community cultures. First Gen performances and events invite audiences to participate in dialogues about generational issues, and about how racism, economic oppression, bigotry, media and violence can sever youth from their cultural origins. The work of First Generation is rooted in the belief that our cultural legacies and family histories are sources of strength as well as struggle.

Performance Project members have been attending Ko performances for over a decade.  In 2011 after First Generation Ensemble performed RIPPLE EFFECT to sold out Ko audiences, The Performance Project and Ko formalized the partnership. First Gen returned in 2013 to perform fo n’ ale (we must go) as part of Ko’s COURAGE season. We continue to collaborate and share ideas through rehearsal residencies and artistic exchanges.

The Performance Project is a proud member of the Network of Ensemble Theaters (NET).

About THE PERFORMANCE PROJECT 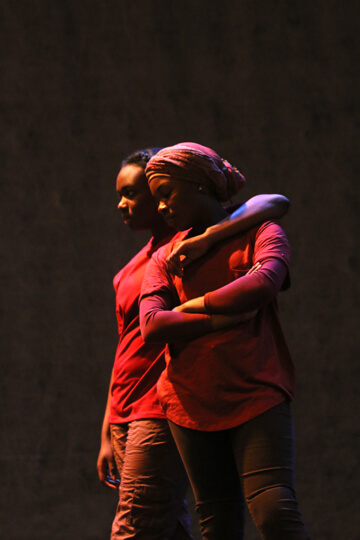 The Performance Project is an arts community of many ages and ancestries dedicated to personal and social liberation. Young people at the heart ofour work create compelling visual and performing art that engages the public in dialog about critical social and cultural issues.  Members participate in intensive artistic training, leadership development, and inter-generational mentoring. Through creativity and the arts we celebrate our connection and our full humanity.

The Performance Project began September of 2000 as a theater and movement workshop at the Hampshire County Jail in Northampton, MA. Visual and theater artist, Julie Lichtenberg, dancer/choreographer, Amie Dowling and eight men incarcerated at the Jail collaborated to create an original performance piece based on the group’s experiences, ideas, and beliefs.

From 2000 to 2007, The Performance Project produced six original plays, a short improvisational film, led theater workshops for women at the Hampden Jail in Ludlow, MA and in youth correctional programs, and established an “Outside” performance ensemble comprised of formerly incarcerated members and other theater artists in the community. The Project became a network of support for members re-entering into the community from jail, and facing the many challenges of reintegration and recovery.

First Generation brings together young adults ages 15-22 who identify as “first generation,” for intensive artistic training, inter-generational mentoring, research, self-reflection, and dialogue. Forming an artistic ensemble, they create multi-lingual performances and claim a public voice in their communities and beyond.

Adam Abdelrahman is 21 years old. He is in love with First Generation because since he came to the USA, he’s gotten a lot of help in feeling comfortable with a new environment and in learning English. Therefore, First Generation is a big part of his life.

Uwizeyimana Angelique lived in Tanzania for nine years and moved to America. She’s now a student at Springfield College. She joined First Generation in 2012, and ever since then, she has been in love with the work they do as performers.

Iyawna Burnett (Co-Director) loves theater. She is the mother of an amazingly talented 3 year-old and is passionate about life and writing. She hopes some day to write a book and to continue to find herself, whatever life has in store for her. She wants to thank her brother Shareef Ibrahim for believing in all her talent. She dedicates this show to her daughter Anyah ‘Skye Burnett, who has made her the woman she is today, for the second she came into her her life, as well as to my brother, Shareef, who has show her the artist within himself and then inspired her to be on the stage.

Eliadine “Dana” Desir –  loves art and music. Both First Generation and these performances mean a lot to her because she gets to connect with friends and be in a place where she is accepted for who she is.

Alexander Joel Graves is a young artist with the desire to perform and create experiences using his mind, body and voice, turning heads and leaving the audience in awe. Acting and music have always been in his spirit and  are a constant reminder that his gift was meant to do some good. “Tenderness” is who he is, and everything he stands for. With this ensemble he will share light to the love within us.

Veronica Israël – born on August 10, 1997 in Port-au-Prince, Haiti, she moved in United states in September of 2012. She is passionate about culture and diversity. She is a 2016 graduate of the High School of Commerce in Springfield and will be attending Hampshire College in the fall. Performing gives her the opportunity to reach out to the world and be herself.

Haja Sidme – sees herself as a writer, performer facilitator and a friend. She is a very hard worker. She is attending Bay Path University in the falls. She is very excited to be a part of this ensemble and would like to dedicate her performance to her Tanti Cire.

About the ARTISTIC LEADERSHIP 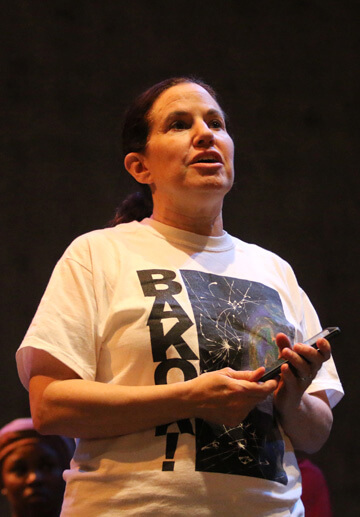 JULIE LICHTENBERG was born and raised in New York City. Co-founder of BOOM!theater in 1994 and the Performance Project in 2000. As a visual and theater artist and cultural activist, she has been creating performances collaboratively for over 30 years because it is what she loves to do, because she learns so much about herself and the world, and because she believes in the power of this work to connect us as fellow humans. She would like to thank her mother,  Jacqueline, James, and her son Marc, for their understanding and support.  She is first generation to grow up in the shadow of the Jewish holocaust and carries the stories of her courageous mother as a gift and a burden. Working with First Generation is a fantastic adventure and a great inspiration.

JAMES ARANA is a social worker and community organizer with over 25 years experience working with people of all ages. James spent more than two decades working in community development in New York City’s South Bronx through Unitas Therapeutic Community, under the tutelage of Dr. Edward Eismann, training and supervising young adults to become mentors for at-risk children and teens in their own neighborhoods. James co-founded the Catrock Gang, an outdoor adventure program for inner-city young men based in New York. A fourth degree black belt in USA Go Ju Karate, James is the director of Dragon’s Den School of Martial Arts where he mentors youth and adults through the martial arts. As Associate Director of Men’s Resources International James worked to reduce family violence and promote a healthy, compassionate, and responsible model of masculinity. He has conducted ‘Men and Women As Allies” trainings in Springfield, Zambia, Nigeria, Liberia, Cote D’Ivoire, Tanzania, Rwanda, and South Africa, supporting work for women’s political and social empowerment.

LESLEY FARLOW performs as a dancer, actress and singer. Several of her works have been seen at the Ko Festival in previous seasons. She has worked with Douglas Dunn, Phyllis Lamhut, Moses Pendleton, Ann Carlson, Johanna Boyce, Marta Renzi, and director Ping Chong, among others. Her own dance/theatre work has been produced in New York City, throughout the U.S. and in Europe. Acting and choreography credits include productions Off and Off-Off Broadway, as well as the Williamstown Theater Festival and regional theater. She currently performs with the Judy Dworin Performance Ensemble, based in Hartford. She is the first woman in her family to go to college. She has had the wonderful experience of collaborating with Julie on the First Generation since its inception and loves every minute of it!

SABRINA HAMILTON is the Artistic Director of the Ko Festival of Performance. In addition to working with First Generation as a lighting designer, she is now delighted to be part of the cohort of artists offering the ensemble vocal and movement training.

ELSA MENÉNENDEZ is a writer, director, producer and performer with Tricklock Company since 2004 and the Outreach Coordinator for the National Hispanic Cultural Center. She has spent the last 30 years working in theatre around the world, including teaching acting, clowning and circus skills in Connecticut at Oddfellows Playhouse Youth Theatre (where she also served for six years as program manager and associate artistic director); teaching children’s theatre in England and Norway; serving as an associate producer in London for BBC movie shorts;  co-founding of BOOM!theatre with Julie Lichtenberg, a theatre company within a men’s medium security prison comprised of individuals serving the longest sentences.  Menéndez has written and performed in many original shows, including co-writing and directing original work, Catgut Strung Violin, which toured to the Canadian Fringe in June 2009 to critical acclaim. At the National Hispanic Cultural Center she founded and directs the Circo Latino summer youth institute.  Menéndez served for many years as a producer for UNM’s Words Afire! New Play Festival, and now works as a producer of Tricklock’s Revolutions International Theatre Festival.

TONY SILVA has been creating sound designs and composing for First Generation since the beginning. He has worked as a composer for dances, play and films since 1990.