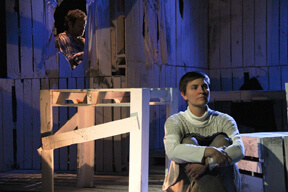 Inspired by the works and ideas of renowned existential philosopher Albert Camus, STRANGER THINGS is an unrelenting domestic tragedy. Ensemble-devised, this  world premiere musical play examines identity, loyalty and the destructive potential of secrets within the context of a broken family trying to eke out a living in the isolated and bitterly cold North.

The production uses an original musical landscape by award-winning Los Angeles composer David O as it delves into the emotional undercurrent of isolated individuals, the play investigates how our relationships to others, or lack thereof, define us. STRANGER THINGS leaves us with the question: Can we atone for the missteps in our past or are we forever bound to the fate those steps unleash? 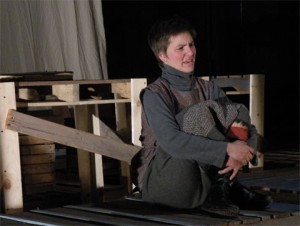 The Ghost Road Company develops its productions through unique ensemble-devised creation techniques.  After identifying the inspirational source material, raw material is then generated through many months of exploration that include: introduction of images, sounds, and music, along with free-writing, improvisation, physical expression without text, Viewpoints-based compositions, and some of Augusto Boal’s Image Theatre exercises.  Finally, a script is crafted through further workshopping of the assembled raw material.

This is the ensemble’s second visit Amherst, Ma.  In 2003, they performed CLYT AT HOME: The Clytemnestra Project as part of the National Gathering of the Network of Ensemble Theaters held at the Ko Festival of Performance.

Ronnie Clark (Co-Creator, Director) joined the Ghost Road Company ensemble in 2007 with Orestes Remembered: The Fury Project in the role of Orestes. In 2008 and 2009, he portrayed both Orestes and Agamemnon in Ghost Road’s Home Siege Home trilo

gy at [Inside the Ford], as well as the various parts of the trilogy at the Getty Villa and on tour. Previously, he has performed with Arizona Classical Theatre as part of the Arizona Shakespeare Festival, inhabiting such roles as Benedick, Orlando, Mercutio, Malvolio, and Titus Andronicus, in addition to helming their acclaimed production of Macbeth. A native of Southern California, he received his B.A. in Theatre from Humboldt State University (1993) and his M.F.A. in Acting from CalArts(1996).

Katharine Noon (Co-Creator, Mother) is the co-founder and artistic director of the Ghost Road Company. Projects include Elektra-La-La, (conceiver, writer, director), which performed in LA and the Edinburgh Fringe Festival, The Tempest (adaptor, director) as well as collaborating with The Burglars of Hamm to create Resa Fantastiskt Mystisk, which performed at the Seattle and NY Fringe Festivals. The Clytemnestra Project (conceiver, co-writer and director) in collaboration with Theatre of NOTE.  The Clytemnestra Project also performed at the Ko Festival at Amherst College in July 2003. Katharine co-wrote and performed in Ghost Road’s Excavate the Monster, which performed at 24th Street Theatre in 2003. She also directed and Co-wrote (with Tamadhur Al-Aqeel) Four Dervishes, which premiered at 24th Street in 2004 and was presented at LATC in 2005. She has directed readings for EST/LA, the Dog Ear Collective, and Moving Arts, and directed the premiere of Laurel Ollstein’s The Dark Ages for Playwrights Arena in 2006. In 2006, she began developing an adaptation of The Eumenides. The subsequent play, Orestes Remembered: The Fury Project, was presented at the Powerhouse Theatre and then traveled to the Fury Factory Festival in San Francisco. Also in 2006 she co- directed and performed in Suzan-Lori Parks’ 365 Days/Plays. In 2009, she reworked the entire Oresteia trilogy, presented Elektra on tour in NY and SF, Orestes at the Getty Villa, and premiered Home Siege Home, the entire trilogy, at [Inside] the Ford in spring 2009. Katharine is one of the Co-founders the Edge of the World Theater Festival and a professor in the Theatre Department at Loyola Marymount University where she recently directed Arabian Nights.

Christel Joy Johnson (Co-Creator, Helga) became a Ghost Road Company ensemble member after playing the part of Electra in their 2007 production of Orestes Remembered: The Fury Project. After graduating from San Francisco State University with a BA in Theatre Arts, she moved on to work with Arizona Shakespeare Festival. A few roles there included Olivia in Twelfth Night, Lucius Andronicus in Titus Andronicus. She has also been seen in LA based Moving Arts productions of Infinite Black Suitcase and The Car Plays. In 2008 and 2009, she portrayed both Elektra and Athena in Ghost Road‟s Home Siege Home trilogy at [Inside the Ford], as well as the various parts of the trilogy at the Getty Villa and on tour.

Brian Weir (Co-Creator, Matt) For Ghost Road: Home Siege Home, Orestes Remembered: The Fury Project, Four Dervishes, Carrots for Hare, Sigismund, and the Duck[t] Tape Soup workshop. In 2008 and 2009, he portrayed Hermione in Ghost Road‟s Home Siege Home trilogy at [Inside the Ford], as well as the various parts of the trilogy at the Getty Villa and on tour. Other LA Theatre includes: Zanna Don’t, Floyd Collins, The Bungler, Cabaret, Company, And the World Goes Round, Catch 22 (all for West Coast Ensemble). The Break Up Notebook, Mommy Mommy the Musical Musical (Hudson), Infinite Black Suitcase, The Car Plays (Moving Arts), The Resistible Rise of Arturo Ui (Classic Theatre Lab), The Memorandum (Odyssey), All Soul’s Trilogy (Playwright‟s Arena), Sleeping With the Ambassador (Collage Dance Theatre), What’s Wrong with Angry (Celebration – GLAAD Nomination). Film: 29th and Gay, Rapid Guy Movement, Spanish Fly, Out on a Holiday. TV: You may have seen Brian making over fashion victims on the Style Network’s How Do I Look?. Brian has an MFA from CalArts.

Doug Sutherland (Co-Creator, Johan) This is Doug’s first production with the Ghost Road Company.  Doug is a member of Circle X and for them performed in Flu Season and Euridyce, at [Inside] the Ford, and Brothers Karamazov. Doug recently performed in a musical play he wrote called To Live With the Poets and Dancers! for the Virginia Avenue Project.  He has also appeared in Say You Love Satan at the Attic Theatre and Ensemble Studio Theatre’s production of Bright Boy, directed by James Eckhouse.  Other Circle X highlights include Split, You Are Here (also writer), Henry IV and Grendel.  Doug came to L.A. via the streets of Michigan, Indiana U. and the Williamstown Theatre Festival.

David O (Composer/Musical Director) Known to thousands of Los Angeles children as “The Professor,” David served as composer and performer for six years in The Voyage of the Global Harmony, part of the LA Phil’s “Summersounds at the Hollywood Bowl.” He is also a Master Teaching Artist and composer with the LAMC’s educational outreach program “Voices Within.”  Original musicals: The Very Persistent Gappers of Frip and The Legend of Alex, both commissioned by Center Theatre Group’s P.L.A.Y. Program; Atalanta, based on the story from “Free To Be You And Me”; other compositions for the theatre include the a cappella vocal score for Hippolytos, the inaugural production at the Getty Villa, and a score for voices, piano, percussion, and kazoos for Ubu Roi at A Noise Within.  Musical director: world premiere of Jason Robert Brown’s 13 at the Mark Taper Forum; the West Coast premiere of Michael John LaChiusa’s The Wild Party and Little Fish. Awards: Ovation Award for the score of Ubu Roi; LA Drama Critics Circle, LA Weekly, and Garland Awards for musical direction of multiple productions including 13, The Wild Party, and the world premiere of The Shaggs: Philosophy of the World.

Cricket S. Myers (Sound Design) In 2011, Cricket received a Tony Nomination and a Drama Desk Nomination for her design of Bengal Tiger at the Baghdad Zoo. She was also nominated for 3 Ovation Awards in 2010, bringing her nomination total to 13. The nominations include: The Lieutenant of Inishmore, The Little Dog Laughed, Bengal Tiger at the Baghdad Zoo, Grace and Glorie, Mary’s Wedding, Trying, Norman’s Ark, Picasso at the Lapin Agile and Emergency for large theater and Cousin Bette, Battle Hymn, dark play or stories for boys, and The Bacchae for Intimate Theater.  Cricket received her MFA in Sound Design from California Institute of the Arts.

Maureen Weiss (Scenic Design) Since graduating from The University of Southern California in 1996, Maureen Weiss has been consistently involved in all aspects of theatre production and education. As the artistic director of Trade City, Maureen made it her goal to approach theatre as both a visual art form and a performance art form. With this goal in mind, Maureen has produced, directed, and designed puppet shows, plays, art exhibits, and poetry readings. Maureen attended art school at Santa Monica College, where she was able to see that her ultimate goal was to make theatre a more accessible art form. Working as both director and designer, Maureen has been able to experience theatre from all sides. Her love of environmental staging led her to graduate school where she studied scenic design. Receiving her Masters from CSULB in ’07, Maureen is currently an adjunct instructor at Loyola Marymount University and Antelope Valley College.  This is her third collaboration with Ghost Road, having designed sets for Orestes Remembered and the Home Siege Home trilogy, as well as 365 Plays/365 Days.

Mark Seldis   (Co-Creator, Producer) is Producing Director of The Ghost Road Company with whom he co-created and directed the workshop productions of Excavate the Monster at 24th Street Theatre and Duck[t] Tape Soup at Shakespeare Festival/LA and the Diavolo space. Mark also produced the tour of Clyt at Home to Amherst, MA, the various incarnations of  Ghost Road’s  Four Dervishes and the ensemble’s Oresteia adaptation (including Orestes Remembered, Elektra, and Home Siege Home) in Los Angeles and on tour. In 2007, on behalf of Ghost Road he helped coordinate the Los Angeles productions of Suzan-Lori Parks‟ 365 Plays/365 Days and co-directed Ghost Road’s week of the play. He has directed world premieres of two of Ken Urban‟s plays (Absence of Weather for Moving Arts at LATC in 2005 and Nibbler for Theatre of NOTE in 2009) and he directed one of The Car Plays for Moving Arts.  Mark was the Managing Director of The Actors‟ Gang from 1990 to 2001 and produced over twenty of their plays. With the Gang he also co-directed Comings and Goings: An Evening of Beckett One-Acts and directed XXX Love Act, for which he won a Backstage West Garland Award for Best Direction. In 1999 Seldis co-founded The Edge of the World Theatre Festival and in 2000 co-created the L.A. History Project for Edgefest.