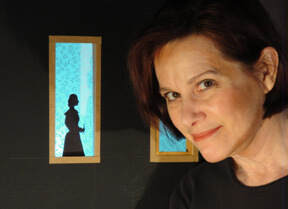 INDUSTRIOUS ANGELS is a solo hand-crafted-story-spinning-shadow-puppet-memory-play-with-music evoking the secret creative lives of women, mother/daughter bloodlines, and the ghost of Emily Dickinson.In a shadowed attic, crammed with curio cabinets, work tables, chests and drawers (containers for mementos and unmentionables), a daughter searches for what it is that ties together her mother, herself, and an elusive poet. A story about the crafting of stories, INDUSTRIOUS ANGELS was conceived by actor/creator Laurie McCants on a visit to Emily Dickinson’s home, where the poet wrote, in secret, the almost 1800 poems that were found after her death.  The story unfolds through puppetry, paper-cutting, music, movement, light and dark, and the weaving together of words.  It is a dance of the hands honoring women’s handiwork:  mending, preserving, ordering, adorning, writing, hiding. 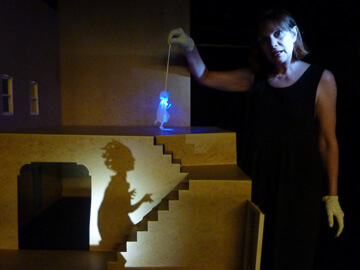 Developed at the Ko Festival of Performance in Amherst, Massachusetts, and the Bloomsburg Theatre Ensemble in Bloomsburg, Pennsylvania, INDUSTRIOUS ANGELS is hand-made by Laurie McCants, in collaboration with director/lighting designer Sabrina Hamilton, scenic designer F. Elaine Williams, and composer Guy Klucevsek, who has created a  haunting score with piano, violin, accordion, and toy piano.

An elite group of musicians, from as far afield as Vienna, have gathered to record Klucevsek’s score for INDUSTRIOUS ANGELS. They include Todd Reynolds on violin, pianist and toy piano prodigy Isabel Ettenauer, and the composer on accordion. 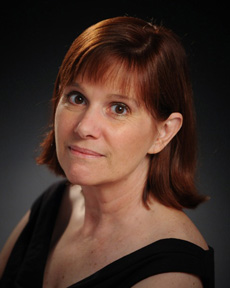 LAURIE McCANTS co-founded the Bloomsburg Theatre Ensemble (BTE) in 1978. Her original work includes THE ALEXANDRIA CARRY-ON (in collaboration with composer/performer Theo Bleckmann, designers Sabrina Hamilton, Rand Whipple, and Elaine Williams), which was performed at the Ko Festival in 2004, prior to its Egyptian tour.

She has been a rehearsal residency artist at Ko for the past two summers.  She has also taught several of our 6-day intensive workshops; one on “Breath, Voice and Presence” and another, co-taught with fellow BTE member, Gerard Stropnicky, on “Creating Theatre from Historical and Documentary Sources.”

Other work includes OUR SHADOWS, a bilingual puppet play created with the Egyptian theatre WAMDA, and SUSQUEHANNA: MIGHTY, MUDDY, CROOKED RIVER OF THE LONG REACH (created in collaboration with the Bloomsburg Theatre Ensemble).  Recently, she played Winnie in Samuel Beckett’s HAPPY DAYS at BTE, and she directed BATTLES OF FIRE AND WATER at Perseverance Theatre in Juneau, Alaska.  She serves on the Board of the Network of Ensemble Theaters and this year was named as one of the two actors to receive a “Distinguished Achievement” fellowship through the Theatre Communications Group/Fox Foundation Fellowship. 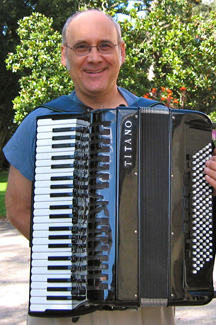 His music/theatre pieces include  Squeezeplay — collaborations with Mary Ellen Childs, David Dorfman and Dan Froot, Dan Hurlin, Victoria Marks and Claire Porter — which The Village Voice called “delicious”; Hard Coal, with The Bloomsburg Theatre Ensemble,   Chinoiserie, with Ping Chong and Company,which was featured on the 1995 Next Wave Festival at BAM, and   Cirque Lili (2000), with French circus artist Jerome Thomas, a piece which has been performed over 250 times world-wide, always with live music.

In 1987, Klucevsek commissioned Polka From the Fringe, a collection of 32 post-modern two-steps by such composers as Carl Finch, Fred Frith, Christian Marclay and Elliott Sharp, which he presented at the 1988 Next Wave Festival, and has performed around the world with his group, Ain’t Nothin’ But A Polka Band.

In 1996, Klucevsek formed The Accordion Tribe, an international line-up of composer/accordionists Maria Kalaniemi (Finland), Lars Hollmer (Sweden), Bratko Bibic (Slovenia), Otto Lechner (Austria), and Klucevsek (USA). They have released three recordings on the Intuition label, and are the subjects of the Stefan Schwietert documentary film, Accordion Tribe: Music Travels , which was released in theaters across Europe in 2004-2005, and featured at film festivals in North America.

Klucevsek has released 20 recordings as soloist/leader, including Polka Dots & Laser Beams and  Who Stole the Polka?, which were chosen as the best recordings of 1992 by John Schaefer on the nationally-syndicated radio program New Sounds, and  Transylvanian Softwear, which was cited as a 1995 Recording of Special Merit in Stereo Review. You can also hear him on John Williams’s scores for the Steven Spielberg films  The Terminal, Indiana Jones and the Kingdom of the Crystal Skull, and  Munich. He has performed on Broadway in Fiddler on the Roof, Victor/Victoria and Piaf.

He was recently awarded a prestigious United States Artist Fellowship. 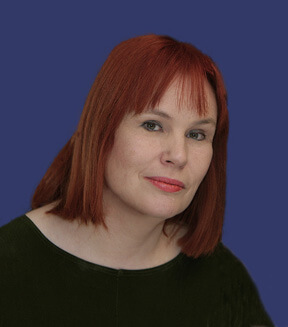 Sabrina Hamilton is the Artistic Director of the Ko Festival of Performance in Amherst, MA. For many years she worked with the New York theatre company Mabou Mines as Lighting Designer, Production Manager, Stage Manager, Performer, and Assistant Director. Other credits include work at the New York Shakespeare Festival, the Goodman Theatre, the Mark Taper Forum and 6 years as Route Lighting Designer for New York’s Village Halloween Parade under the direction of Ralph Lee. International lighting credits include work in Bologna, Florence, Milan, London, Grenada, Geneva, Paris, Rio de Janeiro, Amsterdam, Brussels, Cardiff, Edinburgh, at the Bristol Old Vic, the Theatre Academy in Tampere, Finland, and at the International Theatre Festival in Havana, Cuba.  Her directing work, primarily original pieces, has been seen in New York, Berlin and throughout New England. Two summers ago she directed CRAVINGS: Songs of Hunger & Satistfaction at Ko, which went on to as sold-out, 3-week run at the Central Square Theatre in Cambridge, before being nominated for an IRNE award.

Hamilton is on the Lighting Commission of the United States Institute for Theatre Technology (USITT) and is the USITT representative to the Lighting Design Working Group of OISTAT, the international parent body of USITT. In addition, Hamilton has served on a N.E.H. panel, the “New Forms” panel for Pennsylvania Council on the Arts and the NEA/TCG Career Development Program for Designers panel. She holds a B.A. from Hampshire College and double M.F.A. in Directing and Lighting Design from the UMASS/Amherst. She has been on the faculties of Hampshire, Williams and Trinity Colleges, and Long Island University, and served as the Program Director of the M.F.A. Theatre Program at Towson University for 2006-7. She was recently reelected to a second term on the Board of Directors of the Network of Ensemble Theatres.

F. Elaine Williams, puppet and scene designer, is a longtime collaborator with Laurie McCants on such original plays as The Alexandria Carry-On, seen at the Ko Festival in 2004, and as an Affiliated Artist with Bloomsburg Theatre Ensemble. She recently designed puppets and scenery for Georgia’s official folk life play, Swamp Gravy:  The Big Picture and scenery for The Little Foxes at Theatre in the Square.  She has designed for the Center for Puppetry Arts (Frankenstein, Tales of Edgar Allan Poe, Beauty and the Beast, UNIMA-USA Citations of Excellence winners, Anne Frank:  Within and Without and The Plant Doctor, among others), Stage One:  The Louisville Children’s Theatre, the Alliance Theatre, and Georgia Shakespeare Festival.  Elaine teaches and designs in the Department of Theatre and Dance at Bucknell University in Lewisburg, PA. 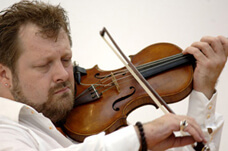 Based in NYC, Todd Reynolds is a violinist, composer and technologist, is a longtime member of Bang On A Can, Steve Reich and Musicians and an early participant in Yo-Yo Ma’s Silk Road Project.

His commitment to genre-bending and technology-driven innovation in music has produced innumerable collaborations with artists that regularly cross musical and disciplinary boundaries, regularly placing him in venues from clubs to concert halls around the world.

A forerunner in the expansion of the violin beyond its classical and ‘wood-bound’ tradition, Reynolds electrifies in concert, weaves together composed and improvised segments, and makes use of computer technology and digital loops to sculpt his sounds in real time, seamlessly integrating minimalist, pop, Jazz, Indian, African, Celtic and indigenous folk musics into his own sonic blend. As a cross-genre improviser and collaborator, he has appeared and/or recorded with such artists as Anthony Braxton, Uri Caine, John Cale, Steve Coleman, Joe Jackson, Dave Liebman, Yo-Yo Ma, Graham Nash, Greg Osby, Steve Reich, Marcus Roberts and Todd Rundgren, and has commissioned and premiered countless numbers of new works by America’s most compelling composers, including John King, Phil Kline, Michael Gordon, Neil Rolnick, Julia Wolfe, David Lang, Evan Ziporyn and Randall Wolff. His interdisciplinary work includes ongoing collaborations with SoundPainter Walter Thompson as well as media artists Bill Morrison and Luke DuBois.

Reynolds is a founder of the band known as ETHEL a critically acclaimed amplified string quartet with whom he wrote and toured internationally. He has also produced Still Life With Microphone, an ongoing theater piece which incorporates his own written and improvised music, compositions written for him, and elements of video and theatrical arts, and his current string quartet, which features all-star young lions from New York’s new music scene, tours with Meredith Monk’s Songs of Ascension and enjoys collaborations with artists from Gavin Bryars to Kenny Werner.  This year sees the March release of  Outerborough, a self-produced and recorded double CD set on Innova Recordings which features his own music as well as a collection of compositions written for the record by a veritable who’s who of American composers, a unique sonic fiesta, all written for Reynolds’ own inimitable acoustic-electric voice. 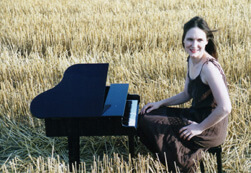 Isabel Ettenauer was born in St. Poelten, Lower Austria, in 1972. After studying in Vienna, Switzerland and Londonshe started an exceptional carreer as a pianist and, since 2001, as a toy piano virtuoso. Ettenauer is a regular guest at international festivals and concert halls. Highlights of the last seasons were performances at Wigmore Hall (London), the Avignon Festival, the Opéra de Lille (France), the Ravello Festival (Italy), the International Gaudeamus Music Week (The Netherlands), the IGNM Musikfest at the Vienna Konzerthaus, concerts in Athens and Cyprus, as well as a US tour which brought her to New York and Washington, and most recently a tour to Taiwan in 2010 . Her London toy piano debut in the BMIC Cutting Edge Series 2002 was selected as pick of the week by several UK newspapers.

Beside her numerous solo recitals, Isabel’s biggest creation, together with French Circus artist Jérôme Thomas, has been her CIRCUS LEBASI –  a music  circus programme performed in a wooden tent. This project was a commission by Linz09, the European Capital of Culture in 2009 and had 16 performances during that season.  Inspired by her unique performances, composers from all over the world have written more than 40 new works especially for her. In June 2006 her CD  THE JOY OF TOY, with nine compositions especially written for Isabel, was awarded the Pasticciopreis of the Austrian Public Radio Österreich