About OVERTURE TO A THURSDAY MORNING 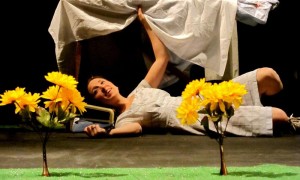 Lila smokes, listens to Talking Heads and wants to be a violin rock star, until unwanted discoveries shove her toward the truth about her own birth.

Coming to Ko after a successful runs Off-Off Broadway, and in VT and upstate NY, OVERTURE TO A THURSDAY MORNING is a suspenseful and inspiring journey that questions the will to go on and who to take with you. 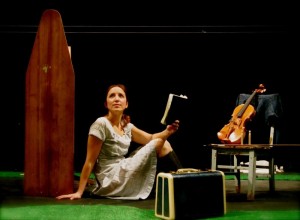 Kali Quinn has performed with Padua Playwrights, Push Push Theatre, NY International Clown Festival, Dell’Arte Company, HERE Arts Center and Clowns Without Borders in Guatemala. Her solo work has played at the United Solo Theatre Festival, The Tank, SoloNOVA Festival at PS 122, Los Angeles Women’s Festival, Dialogue ONE at Williams College, and at other venues throughout the Northeast.

After her BA from the University of Rochester International Theater Program, Kali went on to get an MFA from the Dell’Arte School of Physical Theater  Kali currently serves on the Board of the Networks of Ensemble Theaters, is a Co-Founding Artistic Director of the ensemble GUTWorks and is a core staff member for Accademia Dell’Arte in Arezzo, Italy.

Interested in taking a workshop with Kali? In addition to performing at the Festival, Kali will be teaching a workshop. (Read more…)

WHAT THE PRESS HAS SAID ABOUT KALI QUINN

“Kali Quinn is a charming, sexy and adept actor…”
~ EYESPYLA.com

“We couldn’t ask for better company in verbal and physical wit than Quinn… wonderfully versatile.”
~ Backstage

“Quinn’s full portfolio of talent is on display here… she brings the characters to life with acting skills that are impressively well-developed; She has written the words, but also is able to communicate so much without words. All you need is an hour and a willingness to be moved.”
~ Jon Potter, Brattleboro Reformer

“Kali brings her customary grace, whimsy and beautifully calibrated performance skills to a piece that is funny, moving, and filled with the delight of performance, storytelling, and memory.”
~ Nigel Maister, Director, University of Rochester Int’l Theatre Program

“…a splendid vehicle for the solo actor who moves through many roles in the course of this performance piece, seeming to join the being and body of three generations of woman in fascinating, always changing ways.”
~ Kenneth Gross, critic and dramaturge, author of Shakespeare’s Noise