About Mettawee’s COMMUNICATIONS FROM A COCKROACH: Archy and the Under Side 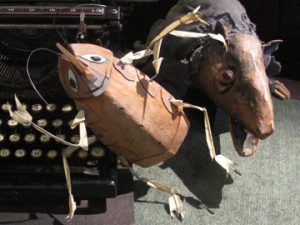 This show is drawn from the Archy and Mehitabel sketches, which were written by noted humorist and poet Don Marquis for his daily column in the New York Sun starting in 1916.

The illustrious Archy is a cockroach who possesses the reincarnated spirit of a free-verse poet and who finds his means of expression by jumping from key to key on Marquis’ typewriter. He shares with us his misadventures as well as those of Mehitabel, an alley cat with the soul of Cleopatra.

Archy, Mehitabel and their lowlife acquaintances face the bewildering challenges of the modern world with humor and a sturdy spirit of determination. This rich material provides us with a context for the creation of a wide array of puppet critters operated by actors in full view of the audience – from fleas, tarantulas and crickets, to an ancient Egyptian mummy – a colorful population from the nooks and crannies of early 20th century New York.

Performed out under the stars within a landscape permeated with live music, song and a spirit of celebration. 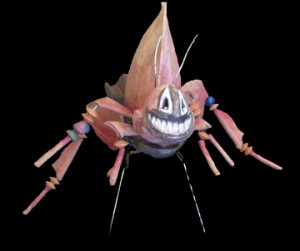 Performed by The Mettawee River Theatre Company under the direction of Ralph Lee on the Amherst College Observatory Lawn off of Snell Street in Amherst.

Tickets: $8 Adults / $6 Children (12 & under). Cash or check only, no credit cards at the door.
No reservations necessary! (Unless the weather looks iffy on the day of the performance)

The Mettawee River Theatre Company, founded in 1975, creates original theater productions which incorporate masks, giant figures, puppets and other visual elements with live music, movement and text, drawing on myths, legends and folklore of the world’s many cultures for its material. The company is committed to bringing theater to people who have little or no access to live professional theater. Each year Mettawee presents outdoor performances in rural communities of upstate New York and New England as well as performing in the New York City area. For more information visit http://www.mettawee.org

From February through May, 1998, the New York Public Library for the Performing Arts at Lincoln Center presented a retrospective exhibition of Ralph Lee’s work that attracted record-breaking crowds to the gallery. As part of the Henson Foundation’s International Festival of Puppet Theater, the Children’s Museum of the Arts featured an exhibition entitled “The Masks and Magic of Ralph Lee” in September, 1998. During 2000 there were three exhibits in New York City featuring creations designed by Ralph Lee for Mettawee productions. Masks and puppets from THE WOMAN WHO FELL FROM THE SKY were on exhibit in the ambulatory of the Cathedral of St. John the Divine; an array of giant figures were display in the Courtyard Gallery of the World Financial Center, and an exhibit of sketches and models were in the gallery of The Kitchen.