THE OLD BOAT GODDESS: Songs of the Ainu 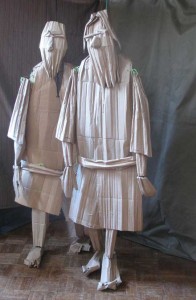 For many centuries, the Ainu people have lived in the northern islands of Japan. Their epic tales reflect a deep respect for nature and belief that there are spirits in all things, both living and inanimate. This show will be based on three of these stories and will feature a loathsome dragon who meets an unexpected fate, a young warrior who subdues a gigantic ferocious fish, and the reminiscences of a primordial tree as she is transformed into a sailing vessel. A range of masks, puppets and giant figures will populate these adventurous tales of interactions between humans, gods and the natural world.

Performed out under the stars within a landscape permeated with live music, song and a spirit of celebration.

Performed by The Mettawee River Theatre Company under the direction of Ralph Lee on the Amherst College Observatory Lawn off of Snell Street in Amherst.

Tickets: $8 Adults / $6 Children (12 & under).
Cash or check only, no credit cards.
No reservations necessary! (Unless the weather looks iffy on the day of the performance)

The Mettawee River Theatre Company, founded in 1975, creates original theater productions which incorporate masks, giant figures, puppets and other visual elements with live music, movement and text, drawing on myths, legends and folklore of the world’s many cultures for its material. The company is committed to bringing theater to people who have little or no access to live professional theater. Each year Mettawee presents outdoor performances in rural communities of upstate New York and New England as well as performing in the New York City area. For more information visit http://www.mettawee.org

From February through May, 1998, the New York Public Library for the Performing Arts at Lincoln Center presented a retrospective exhibition of Ralph Lee’s work that attracted record-breaking crowds to the gallery. As part of the Henson Foundation’s International Festival of Puppet Theater, the Children’s Museum of the Arts featured an exhibition entitled “The Masks and Magic of Ralph Lee” in September, 1998. During 2000 there were three exhibits in New York City featuring creations designed by Ralph Lee for Mettawee productions. Masks and puppets from THE WOMAN WHO FELL FROM THE SKY were on exhibit in the ambulatory of the Cathedral of St. John the Divine; an array of giant figures were display in the Courtyard Gallery of the World Financial Center, and an exhibit of sketches and models were in the gallery of The Kitchen.