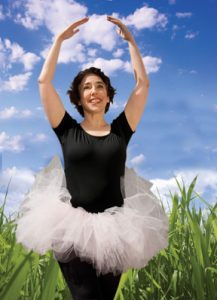 This show is Sara Felder’s whimsical, moving and theatrical performance on art, aging, grief and revelation.  Sara ponders, juggles and finally embodies the facts of her existence:  She can’t dance and people die.  Using her signature style of integrating circus shtik and object-play with personal narrative, Sara explores transitions – between birth and death, between Brooklyn and Manhattan, between ballet and modern. As her mother lays dying, Sara remembers dance class, subway rides and theater lobbies where she stumbles upon life lessons about commerce, class, race and growing old.  She is also considering a trip to the ballet.

“A Queer Divine” was made possible in part by a grant from The Pew Center for Arts & Heritage through the Philadelphia Theatre Initiative. It was developed in part with support from the Jilline Ringle Solo Performance Program at 1812 Productions.

The performances at the Ko Festival of Performance are supported by a grant from the Harold Grinspoon Foundation.

“There is only a queer, divine dissatisfaction, a blessed unrest that keeps us more alive…” – Martha Graham 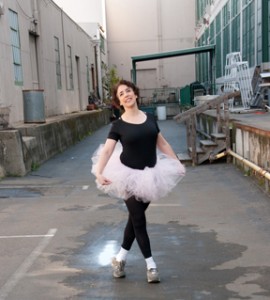 Beginning as a juggler with the Pickle Family Circus in 1984, she has created five solo shows and three multi-actor plays.  Her solo plays June Bride and Out of Sight have both been performed at the Ko Festival to great acclaim and continue to tour.

She is presently working on a new piece, Melancholy A Comedy. Felder has toured Cuba and Nicaragua with Jugglers for Peace, Europe with the Klezmatics, and Ft. Lauderdale with Joel Grey’s Borscht Capades. Felder has taught juggling to inmates at San Quentin through the Cal. Arts Council and has been honored with many awards and fellowships.

Sara presently teaches performance at the Berkeley Repertory Theater and the Marsh in San Francisco, and will be teaching a workshop here at the Ko Festival this summer.  Click HERE for more information.

She fiercely believes in the power of humor and laughter to help dive into the most difficult, controversial and provocative issues.  Sara lives in Oakland, CA with her partner Dev, a rabbi, and their son, Jesse, a middle-school filmmaker and Calvin & Hobbes maven. When not performing or teaching, she enjoys playing the ancient game of Go on her post-modern phone.