The Ko Festival of Performance is delighted to announce:

July 31 – August 7, 2011 at the Ko Festival of Performance,
on the Amherst College campus in Amherst, MA

“Undesirable Elements is designed to help individuals and communities confront and overcome cultural insularity by fostering a greater understanding of the commonalities that bind us all.” 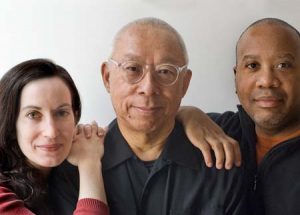 Workshop will be led by:

Ping Chong (Founder/Artistic Director, Ping Chong & Company) is an internationally acclaimed theatre director, playwright, video and installation artist. He is a seminal figure in the interdisciplinary theater community and the Asian-American arts arena. In his 39 year career in the theater, he has been a restless explorer of new possibilities and new directions, always pushing at the boundaries of what theater is and can be. Mr. Chong’s work has been presented at major festivals and theatres around the world including: The John F. Kennedy Center for the Performing Arts, Lincoln Center Festival, Seattle Repertory Theatre, New Victory, Brooklyn Academy of Music, La MaMa E.T.C, Spoleto USA Festival,, Vienna Festival, RomaEuropa Festival, Tokyo International Arts Festival, Singapore Festival of the Arts, and many others. His 2005 puppet theatre production, Cathay: Three Tales of China, an international collaboration with the Shaanxi Folk Art Theater of Xian, China, received 3 Henry Hewes Design Awards from the New York Theatre Wing, and had its Asian premiere in Xian, China in 2010. Mr. Chong has taught at numerous universities, including Harvard and New York University. Among his many honors and awards, he has received a Guggenheim Fellowship, two BESSIE awards, two OBIE awards, including one for sustained Achievement in 2000, and a USA Artist Fellowship in 2006. Chong’s first collection of plays, The East-West Quartet, was published by Theatre Communications Group in 2005, and his play Cocktail (2007) was recently published by the University of Washington Press. A book on the Undesirable Elements series is forthcoming from TCG. Recent projects include The Devil You Know, a puppetry adaptation of The Devil and Daniel Webster, which premiered in 2010 at La MaMa ETC, as part of the Under the Radar Festival, and, Throne of Blood, the stage adaptation of Akira Kurosawa’s film masterpiece, which premiered at Oregon Shakespeare Festival in July 2010 and was presented at BAM’s Next Wave Festival in November 2010.

Talvin Wilks (Summer Institute Coordinator, Ping Chong & Company) is a director, playwright and dramaturg based in New York City. His plays include Tod, the boy, Tod, The Trial of Uncle S&M, Bread of Heaven, and An American Triptych. Directorial projects include Banana Beer Bath by Lynn Nottage (Going to the River Festival/EST), On the Way to Timbuktu by Petronia Paley (Ensemble Studio Theatre – AUDELCO Nomination for Best Director of a Play), Relativity by Cassandra Medley (Ensemble Studio Theatre – AUDELCO Nomination for Best Director of a Play), UDU by Sekou Sundiata (651Arts/ Brooklyn Academy of Music), No Black Male Show (Joe’s Pub/The Public Theater) and Pagan Operetta (The Kitchen) by Carl Hancock Rux, Legends by Leslie Lee (St. Louis Black Repertory Company), and the Obie Award/AUDELCO Award winning, The Shaneequa Chronicles by Stephanie Berry (Ensemble Studio Theatre). He has served as co-writer/dramaturg for eight productions in Ping Chong’s ongoing series of Undesirable Elements/Secret Histories, and dramaturg for four collaborations with the Bebe Miller Company, the upcoming Necessary Beauty, Going to the Wall, the Bessie Award winning, Verge, and Landing/Place for which he received a 2006 Bessie Award. He is currently writing a book on black theatre, Testament: 40 Years of Black Theatre History in the Making, 1964-2004.

Sara Zatz (Associate Director, Ping Chong & Company) has worked with Ping Chong & Company since 1997 and became the manager of the Undesirable Elements series in 2002. Working in collaboration with a wide range of partner organizations, from regional theaters to community-based arts organizations, she has overseen the production of over a dozen original works in the series and served as co-author with Ping Chong on ten productions, including Undesirable Elements (Asian America) which was published in the 2008 New York Theater Review. Most recently, she served as the lead artist on Secret Survivors, focusing on adult survivors of childhood sexual abuse. In over a decade in arts management, she has worked with the Henson International Festival of Puppet Theater, the composer Tan Dun, and Lincoln Center Festival, among other arts organizations. She holds an M.Phil in Irish Theatre Studies from Trinity College, Dublin.

Since 1992, over 40 productions have been made in cities across the United States and abroad. Recent works have explored themes such as immigration, the disability experience, Native American identity, and the experiences of survivors of child sexual abuse. In 2008, Ping Chong & Company launched an in-school education program based on the Undesirable Elements series, working with middle school students to use writing and performance to express their own voices and identities. A current project in Syracuse, NY explores the efforts of the Congolese refugee community to find avenues toward reconciliation.