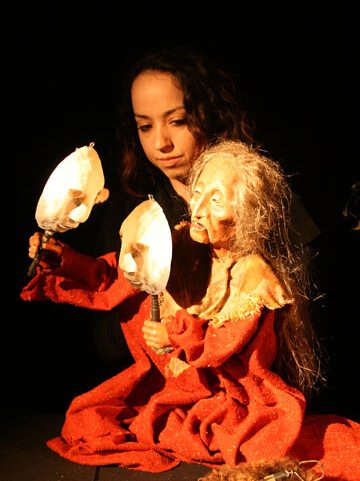 WHEN I PUT ON YOUR GLOVE

Created with adult audiences in mind, but suitable for all ages.

Funded in part by the Expeditions program of the New England Foundation for the Arts, made

possible with funding from the National Endowment for the Arts, with additional support from the six New England state arts agencies.

SANDGLASS THEATER Artistic Director ERIC BASS, after 30 years, is passing the puppets from his signature piece Autumn Portraits into new hands. The result: a look at new piece, WHEN I PUT ON YOUR GLOVE, performed by his daughter SHOSHANA BASS.

Shoshana Bass is an interdisciplinary performing artist, with 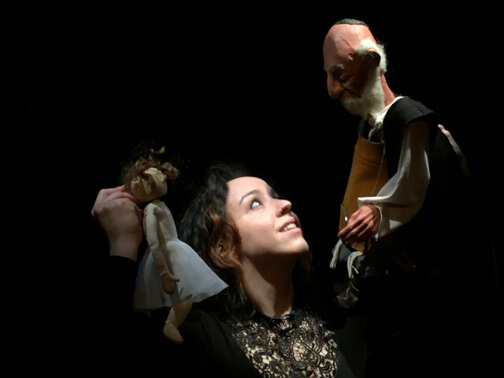 a background in physical theater, dance and circus. Working with director Gerard Stropnicky, she has worked puppetry, dance and spoken word into a piece that explores her relationship to her father’s Autumn Portraits building upon a premise that puppets are containers of memory. In it, a daughter explores what it means for her to slip into her father’s art – and not just the form, but the actual pieces. WHEN I PUT ON YOUR GLOVE is a work that addresses universal questions of belonging, childhood, fear of loss, death and the complicated nature of navigating generational artistic legacy interpretation

Eric Bass has performed Autumn Portraits since 1981. The 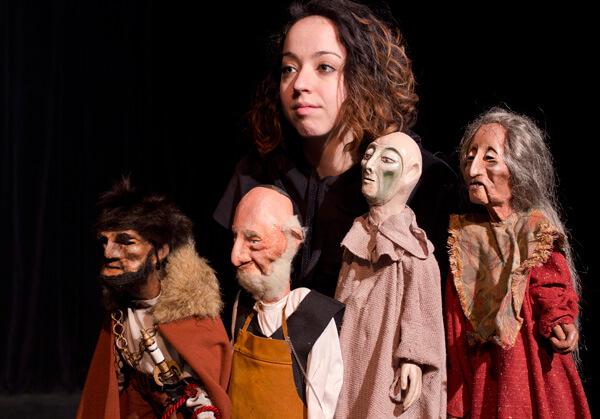 show has traveled around the world and won awards on several continents. It has been performed in three languages. The passing of these puppets into new hands marks a pivotal moment of generational transition for Sandglass Theater. It is an engagement with what legacy means in the field of puppetry; how an art form endures and transforms as it is handed to the next generation; meeting the voice of the past with the voice of the present, and singing it into the future.

Click here to read an article about this project in Puppetry Journal.
Click here for more information on Sandglass Theater

Shoshana Bass (Performer & Creator) Shoshana Bass approaches her artistic life with a fierce conviction in the power of the creative act, and it’s potential to transform, engage, and heal. Having been raised in a traveling family of internationally acclaimed puppeteers, she has spent her life witnessing and in dialogue with artistic voices of diverse cultures, heritages, and perspectives.

She has training and experience in performative mediums ranging throughout dance, theater, puppetry and circus. Her diverse background makes her flexible in collaborating with many aesthetics. She is a graduate of Naropa University with an Interdisciplinary degree in performing arts, peace studies and tai chi. Shoshana has performed and choreographed in Poland, the Virgin Islands, Germany, and the United States. In the last 5 years she was a full time company member of Frequent Flyers® Productions, and the Salsako dance company. She currently resides in Vermont where she is embracing the lineage of Sandglass Theater, building her home from an old trolley car, and learning as much as she can from her parents.

Eric Bass (Concept & Creator of  Autumn Portraits) the Co-Founding Artistic Director of Sandglass, has worked for thirty years as a director, playwright, performer and mask and puppet maker. In 1982, Mr. Bass founded Sandglass Theater in Munich, Germany, with his wife, Ines Zeller Bass. As a director, Eric has worked in America, Australia, Poland, and Finland, as well as the United States. In 1991, he was awarded the Figurentheater Prize of the City of Erlangen, Germany for his contributions to the field of puppet theater. In 1994, he received the Robert and Adele Blank Jewish Arts Award from the Stephen Wise Free Synagogue in New York. He co-directed The Story of the Dog, a collaborative piece between Sandglass Theater and Sovanna Phum Theater in Phnom Penh, Cambodia, which toured Cambodia in 2005 and premiered in the US in the Fall 2006. He recently co-directed Natan el Sabio, a collaborative project with Teatro Luis Poma in El Salvador.  Eric is currently touring in the Sandglass production of D-Generation: An Exaltation of Larks, a piece about people with dementia.  He served for five years on the board of the Network of Ensemble Theaters. In 2010, Eric received the Vermont Governors Award for Excellence in the Arts.

Gerard Stropnicky (Director) is in his 42nd year as a multi-faceted theatre professional. After Northwestern, he studied with Alvina Krause, and in 1978 co-founded Bloomsburg Theatre Ensemble (BTE), where he worked for the next 35 years, becoming Emeritus in 2012. He’s acted in over 100 productions, and directed 70 to date, including classic, contemporary, new and original plays at BTE and elsewhere. He’s written, co-written or devised a score more.  Letters to the Editor, culled from 200 years of letters to local newspapers, was published as a play by Baker’s Plays/Samuel French and as a trade paperback by Touchstone/Simon & Schuster. In rural communities, mostly in Appalachia and the deep South, he writes and directs large-scale site-specific productions featuring diverse community casts employing local story to celebrate, challenge, and address intractable issues. Several were co-written with poet and playwright Jo Carson.  Recently he worked with communities in Uganda and Rwanda, with support from a Network of Ensemble Theaters Travel Grant, as well as a TCG “In the Lab” grant, funded by the Andrew W. Mellon Foundation. He was named USA Lowe Fellow in Theater in 2010.  For his service to the autism community, he was the 2010 Temple Grandin Award winner.

This is the 2nd project he has directed at Ko (previously If At All for Touchstone Theatre) and this summer he will be teaching his 4th workshop at Ko. It runs July 11-16 and you can click HERE for more information.

Ines Zeller Bass (Co-Founding Artistic Director of Sandglass Theater) has been performing with puppets since 1968, when she became a member of the Munich marionette theater, Kleines Speil, In 1978, she created her children’s hand puppet theater, Punschi, which has toured Europe and America. In 1982, Ines co-founded Sandglass Theater with husband Eric in Germany and moved the theater to Vermont in the mid-1980s. Ines is the Director of Sandglass Theater’s children’s programs, collaborates with Eric on all of the theater’s programming, works with local school children, and directs workshops and residencies for puppetry students. She recently designed the puppets and set for Natal el Sabio, a collaborative project with Teatro Luis Poma in El Salvador.  Ines is currently touring in the Sandglass production of D-Generation: An Exaltation of Larks, a piece about people with dementia. She is a UNIMA citation winner and in 2010, received the Vermont Governor’s Award for Excellence in the Arts.

Sabrina Hamilton (Lighting Design) is the Artistic Director of the Ko Festival of Performance. She has toured with Sandglass as a lighting designer for the past several years, first with their production of All Weather Ballads, and then for since 2012 with D-Generation: An Exaltation of Larks, which had its first performances as part of Ko’s 2012 season on “Age & Aging.”  She is looking forward to bringing the show to Germany in the fall.