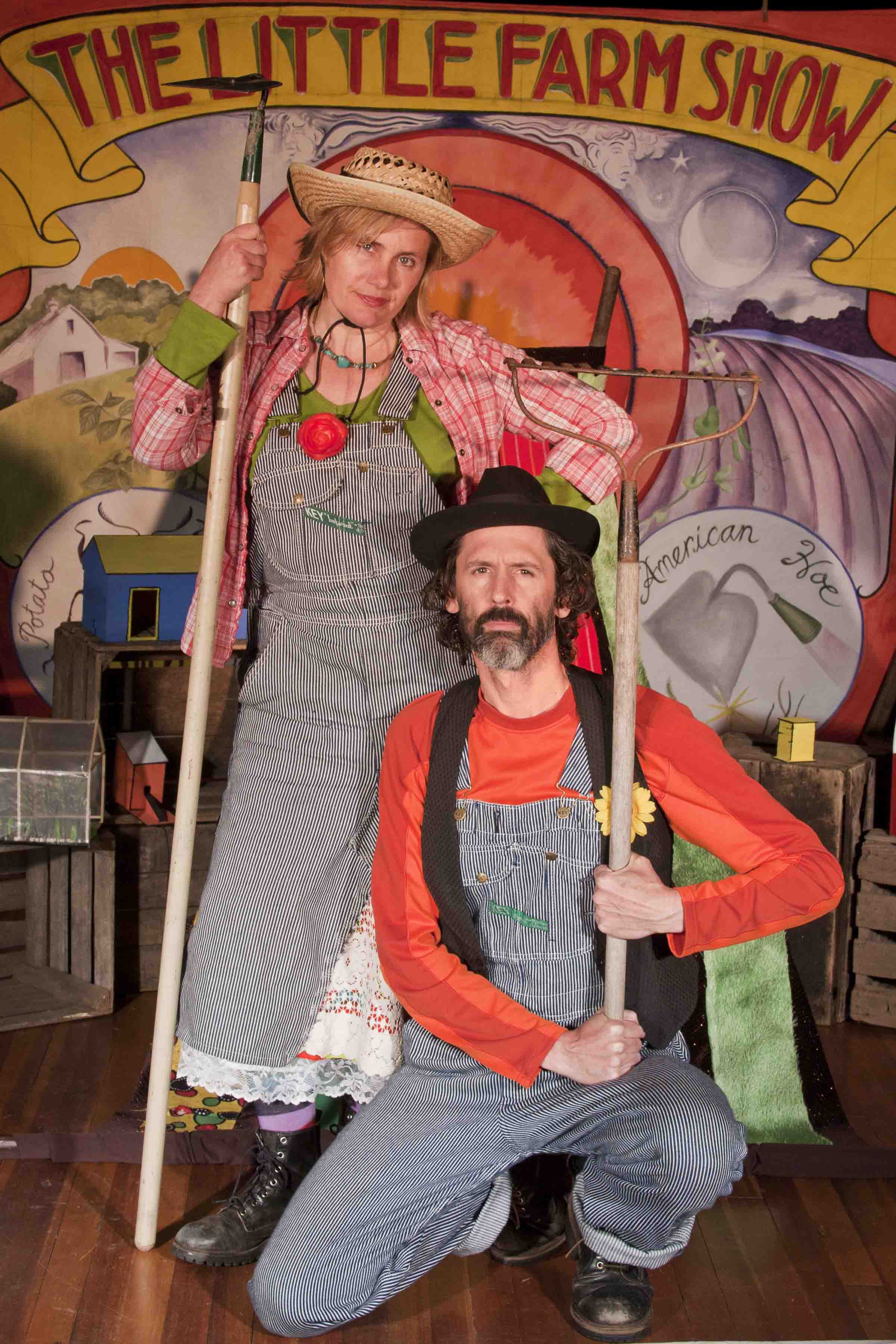 Where Does Your Food Come From?

THE LITTLE FARM SHOW is an original musical theatre performance for all-ages created and performed by Tannis Kowalchuk and Brett Keyser. The actors play “The Amazing MacDonald Twins,” a brother and sister team of barnstorming performers who tour “The Greatest Show on Dirt!” from town to town.

WHERE DOES YOUR FOOD COME FROM? NACL Theatre explores this question with an all-ages musical extravaganza about FARMING, FOOD, and the ENVIRONMENT. From the inception of the solar system, to sunset on Millicent’s dream farm, the Magnificent MacDonald Twins give audiences a whirlwind tour of “The Greatest Show on Dirt!”

THE LITTLE FARM SHOW kicks up some dirt with live 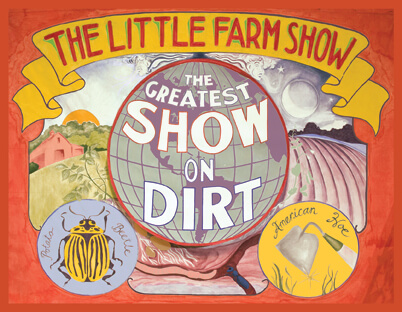 music, and high-spirited performances. The play navigates through the history of agriculture from 10,000 BCE to today, exploring sustainability, local food systems, and organic farming. Steeped in history, philosophy, and a wheel barrow-full of information, THE LITTLE FARM SHOW will not only entertain, but will ask people to consider their food choices and the effect those decisions have on their bodies, the environment, and society.

On the Amherst College Observatory Lawn off of Snell Street in Amherst. Bring blankets, lawn chairs and insect repellent, but leave the dogs at home!

No reservations necessary! (Unless the weather looks iffy on the day of the performance)

MORE ABOUT THIS PIECE

The Little Farm Show co-creator, Tannis Kowalchuk lives and works on Willow Wisp Organic Farm. The farm grows vegetables and flowers for the Upper Delaware River communities in Pennsylvania and New York where it operates a CSA program year round, sells at local farmers markets and to area restaurants and stores. 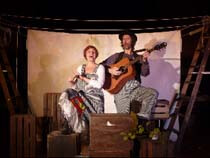 The Little Farm Show is a direct result of Kowalchuk’s desire to raise awareness about where our food comes from, the positive impact that healthy food has on our health, how an organic farm works, and the important role that local agriculture plays in a community.

The performance  premiered at NACL Theatre in Highland Lake, NY  with support from an individual artist grant awarded to Tannis Kowalchuk from The New York State Council on the Arts, and from an Environmental Initiatives grant from The Gerry Foundation. 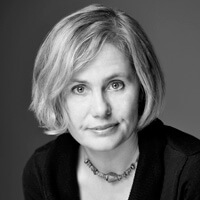 TANNIS KOWALCHUK is co-founder and artistic director of NACL Theatre. Originally from Canada, Tannis trained in the ensemble physical theatre practices of Primus Theatre and Odin Teatret. She has created and performed in 16 NACL productions, and, in 2014, she directed The Weather Project, a large-scale theatre performance with a cast of over 75 professionals and community members. She currently tours salon performances ofShakespeare’s Will, by Vern Thiessen, directed by Mimi McGurl. Past works include STRUCK(2013), a devised multi-media performance about stroke, presented at Cleveland Public Theatre and HERE in NYC, The Little Farm Show (2011), a musical, co-written by Kowalchuk, about farming and food justice, Self Portrait at County Fair (2009), by Mike Geither, The Lost Book of Lakewood House (2009), a site-specific performance about the history of the Catskills, The Uncanny Appearance of Sherlock Holmes (2008) in the role of Dr. John Watson, presented at HERE (NYC), andThe Mystery of Lakewood House (2007). Other significant performances include The Confessions of Punch and Judy, created and performed with Ker Wells with director Raymond Bobgan, 10 Brecht Poems, a collaboration with Leese Walker of Strike Anywhere, and The Passion according to G.H., a solo performance based on the novel by Clarice Lispector directed by NACL artistic director Brad Krumholz. In 2008 she became a mother and began growing flowers on Willow Wisp Organic Farm. Tannis is a graduate of The University of Winnipeg theatre department and was a core member of Primus Theatre, a prominent experimental theatre troupe based in Canada from 1990-97. Narrowsburg independent filmmaker Tina Spangler has directed a short documentary about Tannis entitled HOME with Tannis Kowalchuk. 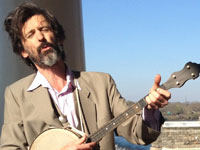 is NACL production and facilities manager, designer, and writer-performer, collaborating on The Weather Project (2014),STRUCK (2013), The Little Farm Show (2010-present), Exilio: My Life as Bolaño (2011), Self-Portrait at County Fair (by Mike Geither, 2009),The Lost Book of Lakewood House (2009), The Uncanny Appearance of Sherlock Holmes (2006-08), and The Mystery of Lakewood House (2006). He is the proprietor of Nightjar Apothecary, designing and performing original, science-themed theatrical works and installations for museums, theatres, and public thoroughfares since 2003. Works include Darwinii: The Comeuppance of Man (with Glen Berger, 2009-present); the ever-evolving water-song cycle Sand Reckonings, first performed at the State of the Nation Festival in New Orleans in 2009; The Christmas Lectures of M. Nearanight (2010); Tann, Horns, & Dead Dogs: Tales of Civic Effluvia (2008); You Are Here (2007-08); Turkish Delightenment (2006-07); and Horridus! Horridus! Name-calling in the Wilderness (2003-04). He was awarded an Independence Foundation Fellowship in the Arts in 2010. Brett is a former core collaborator with Cleveland experimental groups Wishhounds and Theatre Labyrinth, working on Blue Sky Transmission: A Tibetan Book of the Dead (2002), Even Without Angels(2001), The Hidden Twin (2001), The Sibyl (1998-2000), Transformations of Lucius (1999),Never Speak to Strangers (1998), and The Warbling Carousel (1996). He studied at Odin Teatret in Denmark, Winnipeg’s Primus Theatre, and the San Francisco School of Circus Arts. He has a degree in Folklore and Folklife Studies from the University of Pennsylvania.

The Little Farm Show crows with energy and intelligence.  The writer/actors give a tour of cosmic and earth history, as well as the cultural evolution of ecological awareness and sustainable food production (phew!)—all in the space of 55 entertaining minutes of song, humor, and incredible acting. We have booked (200) seats so that our entire student body can experience this smart and thrilling Little Farm Show.
Peter Comstock, Head of Homestead School, Glen Spey, NY

This incredibly creative team has really hit home with this production. Inspired by her own life in the Catskills, and driven by the desire to see our nation return to sustainability, Kowalchuk has made the concept of farm living highly palatable and accessible for everyone fortunate enough to spend some time with The MacDonald Twins. The project is clearly inspired and couldn’t have come along at a better time. —Jonathan Fox, The River Reporter